Chinese device makers have been putting out tiny devices that you can plug into a TV to run Android apps for over a year. And while I have a habit of referring to them as slightly larger than a USB flash drive, they’re actually pretty chunky by modern flash drive standards.

But SmartCandy’s new Android TV stick really does look more like a USB flash drive than a tiny Android computer. It measures just 2.67″ x 1.14″ x 0.47″ and weighs about an ounce. 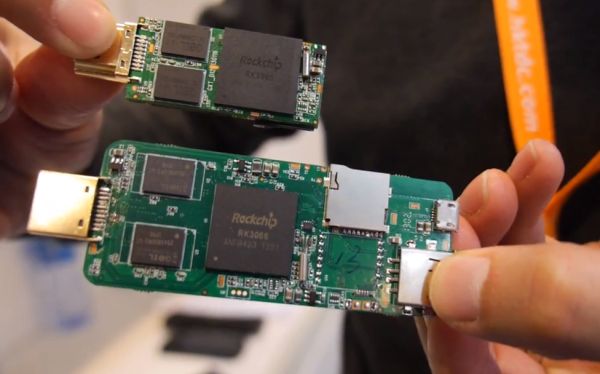 ARMDevices caught up with SmartCandy at a recent trade show and got a look at the tiny TV stick.

Under the hood it has a 1.6 GHz Rockchip ARM Cortex-A9 dual-core processor, 1GB of RAM, 8GB of storage and Android 4.1 Jelly Bean. It has a microSD card slot.

There’s a catch though — there’s no room for a WiFi or USB port in the case, so the company offers an external adapter with WiFi and USB. There’s also an optional dock with Ethernet and 3USB ports.

The company’s website also mentions a model with a Telechips processor, 512MB of RAM, and 4GB of storage.