Laptops with 1080p displays are so last year. A handful of notebooks including the MacBook Pro with Retina, Google Chromebook Pixel and Toshiba Kirabook already have higher-than-full-HD screens. Now Sharp wants to step things up a notch with its new IGZO displays for notebooks.

IGZO screens use less power than traditional LCD displays, but because of the technology used to produce them, it’s also easier to squeeze pixels together at high densities. 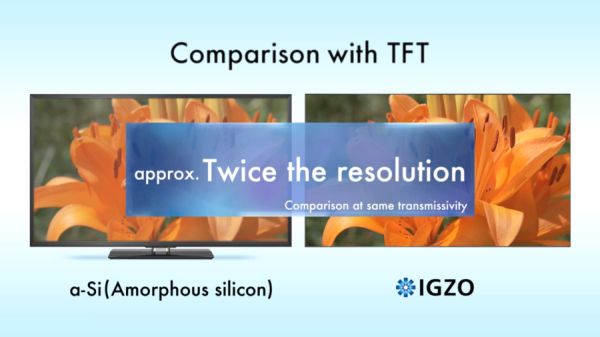 Sharp is plans to start production of three new IGZO displays this year:

The smallest of the displays will have a pixel density of 253 pixels per inch, while the 14 inch model is a 262 ppi display, and the 15.6 inch screen has 235 pixels per inch.

While it’s nice to see progress in laptop displays, high-resolution screens can be a bit of a mixed blessing on a Windows laptop. Full-screen apps downloaded from the Windows Store tend to scale well to high-res displays. But desktop-style apps (which includes almost every Windows app released in the past 20 years) can be another story.

Windows includes tools that let you adjust the DPI settings so that text and graphics don’t look incredibly small on a computer with a high resolution screen. But many third party apps aren’t designed to take advantage of that option, which means that some apps will look better on a higher-resolution screen, while others look far worse.

It’d be nice to say that’s a sign that either Microsoft will roll out a better resolution-independent apps with Windows 8.1 or that these screens are destined for devices where they’ll do the most good (like new MacBook or Chrome OS notebooks). But as the Toshiba Kirabook, and even the Microsoft Surface Pro demonstrate, just because Windows isn’t really ready for high-res screens doesn’t mean device makers won’t release them.

Sharp plans to begin production of its new IGZO displays in June.