NVIDIA’s Shield made a stop at the FCC this week on its way to store shelves. NVIDIA started taking pre-orders for its first handheld gaming console a few weeks ago, and it’s expected to ship to customers by the end of June.

While the FCC documents don’t tell us much we didn’t already know, there is one interesting detail. 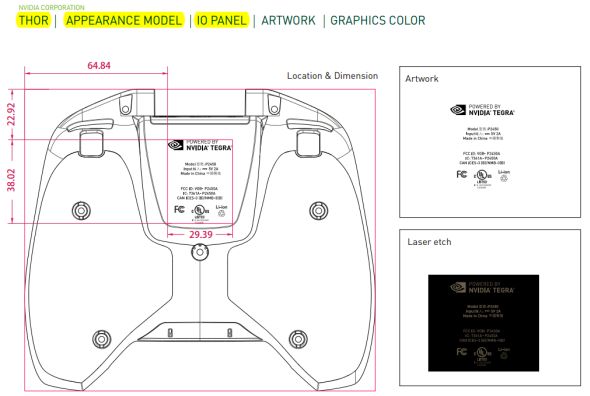 The label drawing refers to the game console by its code-name, “Project Thor.” When NVIDIA CEO Jen Hsung Huang introduced the device during a speech at the Consumer Electronics Show in January, he accidentally referred to the device by that name at one point.

He then brushed it off, saying that it’s hard to remember which code-name goes with which project, and I wasn’t the only one who thought he’d accidentally let the name of a different top-secret project slip. But apparently he didn’t. He just accidentally used the name people had been using behind the scenes instead of the new official name for the gaming device.

The NVIDIA Shield looks like an Xbox-style game controller with a 5 inch, 720p display attached to it. The device is powered by an NVIDIA Tegra 4 processor, supports HDMI output so you can play games on your TV, and also lets you stream PC games over a wireless network so that you can play games installed on a computer with an NVIDIA graphics card on a mobile device that you can carry around the house.

NVIDIA’s game console is up for pre-order for $349.