It’s been more than a year since the folks at Notion Ink announced they were working on a new tablet called the Adam II. But the Indian company hasn’t had much to say about the project since then.

Now NextBigWhat is reporting that the Adam II could actually launch next month — and it’ll feature an unusual design with two displays. 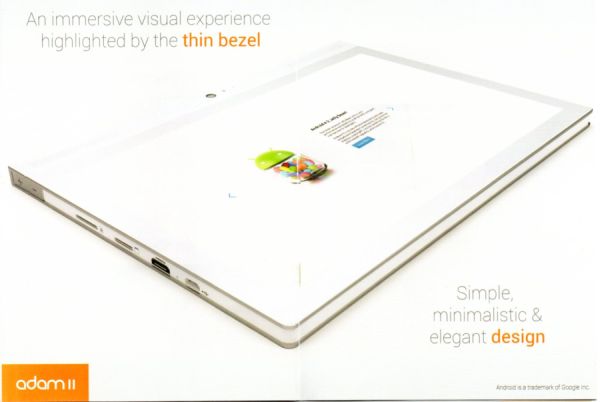 Notion Ink has also reportedly changed the tablet’s specs. When the Adam II was announced last year it was expected to ship with a TI OMAP 4 processor and Android 4.0 software.

Now that Texas Instruments is largely pulling out of the mobile device space and Android 4.0 is looking pretty dated, it’s not surprising to hear that the Notion Ink team has made some changes.

While Notion Ink isn’t exactly a household name in the US, the company made a bit of a splash a few years ago by introducing one of the first tablets to feature an NVIDIA Tegra 2 dual-core processor and one of the only consumer-oriented tablets ever to ship with a Pixel Qi sunlight viewable display.

The original Adom tablet got mixed reviews for its software and performance. But one of the biggest challenges the small Indian company faced was manufacturing enough tablets to meet demand.

I’m not really sure what the upcoming 2-screen tablet will look like, or if thinking outside the box is really the best way to succeed in today’s tablet market. But it should be interesting to see what Notion Ink comes up with next.

Update: More details are available, and it looks like the second display is an E Ink screen for showing notifications on the spine of the book-shaped tablet.