Nokia has introduced a new phone that could spell the end of feature phones. The Nokia Asha 501 is a $99 handset with a 3 inch touchscreen display and Nokia’s Asha operating system with support for third party apps.

While Nokia’s higher-end smartphones run the more versatile Windows Phone software with access to thousands of apps from Microsoft’s app store, there are already some key apps available for the Asha 501 including software from CNN, Facebook, Nimbuzz, Twitter, The Weather Channel, and games from EA, Gameloft, and others. 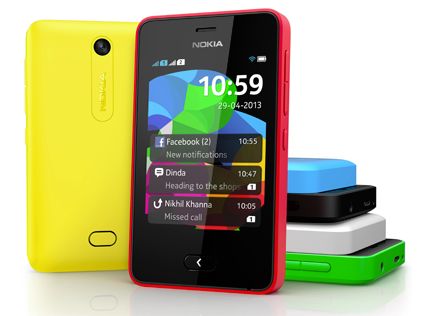 Nokia says the new phone will be available from 60 wireless carriers in 90 countries soon. But there’s no mistaking this phone for a higher-end Nokia Lumia handset.

For one thing, it doesn’t include 3G capabilities. You can access the internet using the built-in WiFi or a slower 2G data network. The Nokia Asha 501 supports top download speeds of 236.8 kbps over a GSM 900 MHz or 1800 MHz network.

The good news is that phone should get pretty great battery life: Nokia is promising up to 17 hours of talk time, and up to 48 days of standby time from the built-in 1200 mAh battery.

Nokia will offer the Asha 501 in a range of bright colors including red, yellow, blue, green, black and white.