Toshiba hasn’t yet announced plans to release a tablet with an NVIDIA Tegra 4 processor. But  a few weeks ago benchmark results for an unannounced Toshiba AT10LE tablet appearing to sport NVIDIA’s new chip started to make the rounds.

Now Greek site Techblog.gr has some more details — and pictures. 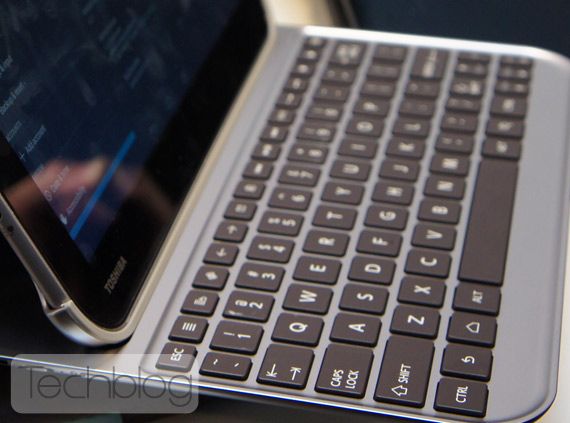 The Toshiba AT10LE-A appears to be powered by a 1.8 GHz Tegra 4 ARM Cortex-A15 quad-core processor. It seems to have a 10.1 inch display and the usual set of ports, and features including a microSD card slot, mini HDMI output, and stereo speakers.

Like many high-end Android tablets, the Toshiba AT10LE seems to be designed to work with an external keyboard. One of the leaked photos shows a docking station with a full-sized QWERTY keyboard that has dedicated Android function keys for back, home, and menu options, among other things.

The keyboard doesn’t seem to have an integrated touchpad, and it’s not clear if it has a high capacity battery which can extend the tablet’s run time. That’s something that we’ve seen in keyboard docks from many companies, but not every Android tablet with a keyboard attachment uses the docking station to extend battery life.

There’s no word on the price, release date, screen resolution, or other specs.

You can find more images at Techblog.gr.