Hisense is launching two new budget Android tablets in the US. The company hasn’t officially announced either model yet, but they’re both apparently available a bit early at some Walmart locations.

Following yesterday’s report that the tablets would ship for $99 and up, Liliputing reader Adam and blogger VelcoElectro have both confirmed that they’ve purchased models at Walmart locations. 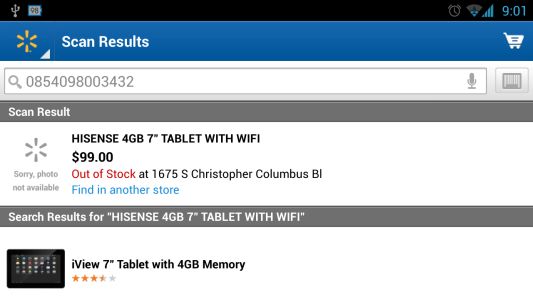 As expected, it looks like the Hisense Sero 7 Pro is a $149 tablet with an NVIDIA Tegra quad-core processor, a 7 inch, and Android 4.2 Jelly Bean software.

Here are the full specs:

The $149 price tag seems pretty reasonable considering this tablet has the specs of a $199  Google Nexus 7 with half the storage, but with removable storage, HDMI output, and a few other bonus features.

But if you’d rather spend a little less, the $99 Hisense Sero 7 Lite is a tablet with the same screen size, but somewhat less impressive specs, including:

In other words, if the Sero 7 Pro is sort of like a cheaper Google Nexus 7, the Sero 7 Lite is a cheaper HP Slate 7.

Both tablets featured the Vudu logo on the box, suggesting they’ll come with the Android app for the online video service preloaded. They’re also Google certified devices, which means they come with the Google Play Store and other apps including YouTube and Gmail.

If you use the Walmart Android app‘s barcode scanner to scan the product codes on these boxes you’ll see confirmation that the store charges $99 for the Hisense Sero 7 Lite and $149 for the Pro model. Unfortunately, as of May 21st, the app doesn’t seem to think the tablets are in stock at any stores.