Gigabyte’s BRIX computer measures just 4.5″ x 4.2″ x 1.2″. But the company seems to be out to prove that big things can come in small packages. The little computer supports up to an Intel Core i7 Ivy Bridge processor.

The company first started showing off its small form-factor desktop PC in January, and now you can find more details (and photos) at the Gigabyte website. Unfortunately one thing you won’t find is any mention of how much these little guys will cost. 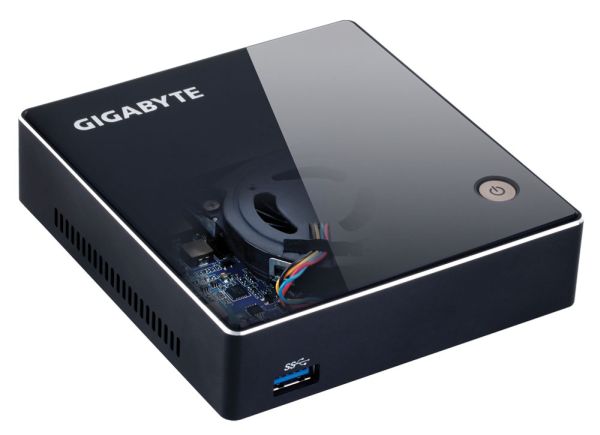 The Gigabyte BRIX bears a more than passing resemblance to Intel’s NUC mini computer design. But Gigabyte’s version is a little more powerful — so far Intel’s version only supports chips up to a Core i5 processor.

Gigbyte’s mini-desktop also features 2 USB 3.0 ports, HDMI and Mini DisplayPort, Ethenert, and 802.11n WiFi. Under the hood there’s an mSATA slot for solid state storage and 2 memory slots for up to 16GB of RAM.

Gigabyte plans to sell the BRIX devices as barebones systems. While they’ll come with Core i3, Core i5, or Core i7 chips, you’ll be expected to supply your own storage, memory, and operating system.

If you’re looking to build a powerful PC for gaming or work, odds are you can find a model with more expansion options, support for discrete graphics, and more. But the BRIX looks like an interesting option for a home theater PC or any other application where small size and decent performance trump bleeding edge specs.

It should also be interesting to see whether Gigabyte upgrades the BRIX with Intel Haswell chips once they become available this summer. That could bring better graphics performance and lower power consumption to the little computer line.

45 replies on “Gigabyte BRIX packs a full-fledged desktop PC into a 4.5 inch case”