Fanhattan has been offering an iOS app for a few years that lets you find, watch, and bookmark online videos from dozens of sites. Today the company is also bringing its web app out of private beta. But Fanhattan has a bigger ambition: The company wants to change the way you watch TV… on your TV.

The upcoming Fan TV is a set-top-box that lets you view live TV, streaming video, and DVR content from one simpler user interface. It also comes with a buttonless remote control that lets you navigate the same way as you would on a phone or tablet, simply by swiping your fingers across the surface. 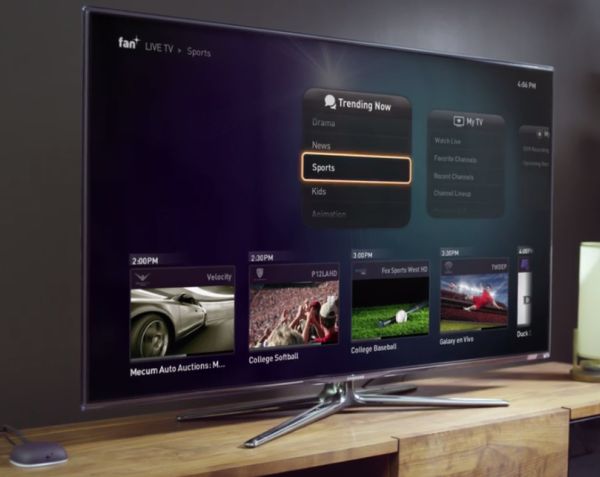 The concept is pretty slick. Instead of switching from your cable box to your Roku or Apple TV device to move from live or recorded shows to internet video, everything’s in one place.

Technically Google TV lets you do the same thing — but you have to run an IR blaster from a Google TV device to your cable box in order to change channels. The user interface for Google TV also changes every time you switch apps, so you have to navigate through a different set of menus and use different buttons on your remote to watch videos from Netflix than you do for Hulu or Amazon.

Fanhattan wants to simplify everything by releasing one box that is your cable box, DVR, and internet TV device. And you don’t need a complicated remote control with a QWERTY keyboard to enter your Amazon or Netflix login details, because you can use the web app or iOS app to do that and sync your data with your Fan TV. You can also queue programs to watch later that way.

The only catch is that the company will need to partner with TV providers to do that. There’s no plan to launch a version of Fan TV that’s just for internet video. Either you’ll get it from your cable or satellite provider or you won’t get it at all.

So far Fanhattan hasn’t announced any partners or pricing details for the box.

via The Verge and Gizmodo

3 replies on “Fanhattan wants to replace your cable box, DVR and Roku with Fan TV”