PC maker Cirrus7 plans to ship a new fanless desktop computer by the end of June. It’s called the Nimbus, and it looks more like a heatsink than a PC, because that’s basically what the entire case is.

Each piece of the case is a layer of laser-cut aluminum designed to dissipate heat from the processor and other components without the use of any moving parts. That means the little PC keeps both cool and quiet while it operates. 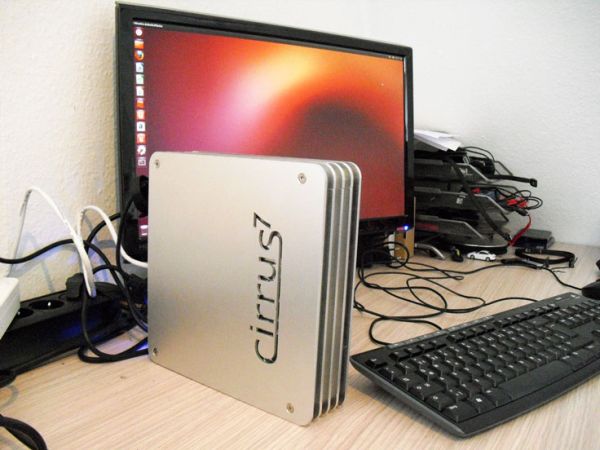 That kind of design doesn’t come cheap. Prices start at 499 Euros ($642) for a model with an Intel Celeron processor and Ubuntu Linux. It’s also available with Windows 8 and faster processors, up to an Intel Core i7 chip, but those’ll run you even more.

Update: The Cirrus7 Nimbus is now available for 449 Euros and up.

For now the system ships with Ivy Bridge processors, but models with Haswell chips should be available around the end of the year.

At idle the computer uses about 15W of power, and the max TDP is between 30W and 65W depending on the processor you choose.

The base model features 4GB of RAM and a 60GB mSATA solid state disk. There’s also room in the case for 2 2.5″ 7mm SATA III disks.

The company’s based in Germany and offers free shipping within the country, charges 20 Euros to ship elsewhere in the European Union, and only delivers outside the EU upon special request.

6 replies on “Cirrus7 Nimbus fanless, Linux-friendly PC has a heatsink for a case”