Google has released a new beta version of the Chrome web browser for Android. Among other things, Chrome 28 Beta includes built-in support for Google Translate. When you visit a website in a language other than the default language on your device, a note will pop up asking if you’d like to translate the page. 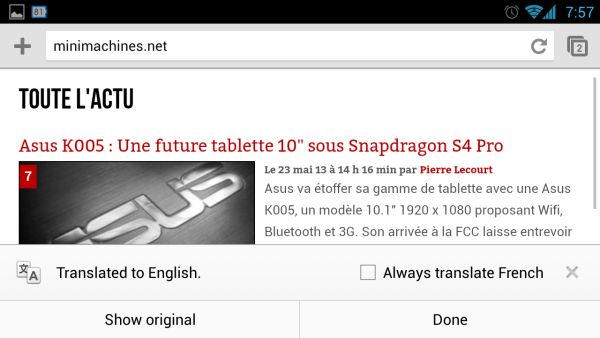 Up until now, that was a feature that was only available in the desktop version of Chrome.

It doesn’t always work perfectly on a mobile device. Sometimes you get an “oops” message letting you know the text couldn’t be translated. And when I tried translating a few pages, Chrome said it was finished, but the text was still in French.

And don’t get me started on how difficult it is to even understand what you’re reading when looking at some translations — it’s tough for a machine to translate not only the words on a page, but also the proper syntax.

Still, it’s pretty cool to be able to occasionally visit a website written in a language you don’t speak and have your mobile browser attempt to translate it for you without having to copy and paste the text or URL into a separate app. Hopefully Chrome will get even better at performing this task by the time Chrome 28 exits beta.

You can download Chrome Beta from the Google Play Store.