BlackBerry has introduced a new smartphone aimed at developing markets. It’s called the BlackBerry Q5, and it’s a phone with a QWERTY keyboard, a 3.1 inch touchscreen display, and BlackBerry 10 software. 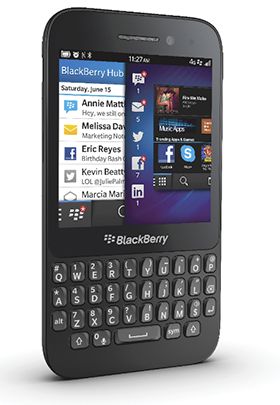 BlackBerry hasn’t provided a lot of hardware details for the Q5, but it’s expected to be available in select parts of Europe, Asia, Africa, the Middle East, and Latin America starting in July. The focus on emerging markets mean that this device will probably be cheaper (and less powerful than the BlackBerry Q10 QWERTY phone.

We do know that the phone will be available in red, black, white, and pink colors.

Update: N4BB reports that the BlackBerry Q5 features a 1.2 GHz dual-core CPU, 2GB of RAM, 8GB of storage, a 2MP front camera, and a 5MP rear camera. It has an LCD display rather than the OLED screen found on the BlackBerry Q10, and lacks support for HDMI output.

The company also announced that the Q10 will be available in the US starting in June.

BlackBerry also announced that there are now over 120,000 apps available for devices running BlackBerry 10 software, including the Q5, Q10, and touchscreen-only BlackBerry Z10.