The US version of the Samsung Galaxy S4 smartphone has a locked bootloader which prevents users from easily loading custom firmware on the phone. That’s not surprising, since most Android phones sold in the US have locked bootloaders which make installing custom recoveries or ROMs such as CyanogenMod or Paranoid Android difficult.

But while the Samsung Galaxy S4 is one of the most powerful phones available today, the leader of the CyanogenMod team basically recommended staying away from the AT&T verison yesterday. He seems to feel differently about the T-Mobile version. Today he posted a picture showing that he has CyanogenMod running on the S4.

As for the AT&T variant, where some folks see a problem, others see a challenge. Security researcher Dan Rosenberg has been looking for a way to unlock the Galaxy S4 bootloader, and it looks like he’s succeeded. 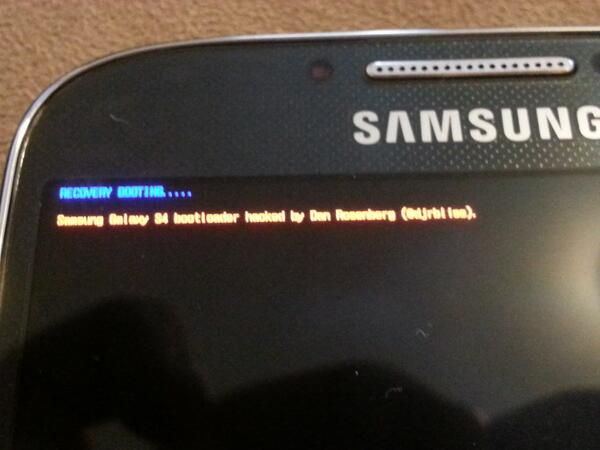 He’s already managed to install a custom recovery on the phone, and eventually we could see tools such as ClockworkMod or TWRP recovery ported to Samsung’s latest phone.

That, in turn, would allow users to backup, wipe, or restore their devices as well as flashing custom firmware to replace Samsung’s version of Android.

The Galaxy S4’s biggest competitor is probably the HTC One, which has a similar display, processor, and price tag. But you don’t necessarily have to hack your device to unlock the bootloader on that model. HTC offers a developer edition, which ships unlocked. And you can also unlock the bootloader using HTC’s own tools.

Developer h8rift has already released an early build of CyanogenMod 10.1 for the HTC One.

But it’s good to know that Samsung’s new flagship phone is also hackable.