Folks have been using the popular Arduino DIY computing platform to build robots and all sorts of other simple computing devices for a while. Arduino boards are inexpensive and relatively easy to use devices with support for a range of sensors and motors.

Now there’s an official Arduino Robot kit which makes it even easier to get started. 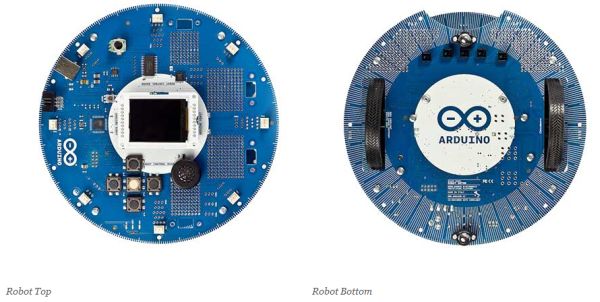 The kit comes with pretty much everything you need to make and program a simple robot. It has a motor board which helps the robot move around, and a control board featuring sensors that help the device figure out where it is and where it’s going.

Each board has an ATmega32u4 16 MHz processor with 32KB of memory. The whole thing is powered by 4 AA batteries, but can also run from USB power. It also features an LCD display, LED lights, a speaker, compass, IR port, wheels, and room to attach extra sensors and other hardware.

Arduino Robot is a circular device with a diameter of about 7.5 inches, and it measures about 3.9 inches high.

The kit is fully open source and can be programmed using the Arduino IDE.

Arduino is starting to offer its Robot kit at the Maker Faire in San Mateo this weekend, and plans to sell it online and through other distributors starting in July. The company hasn’t announced how much the Arduino Robot kit costs.

via Engadget, Make, and Slashdot