AMD is launching three new families of processors, which the company thinks fill a gap in the market. The new Temash, Kabini, and Richland chips are largely aimed at tablets, hybrids, and ultrathin notebooks and performance notebooks respectively.

It’s not like market leader Intel doesn’t already have those areas covered, but AMD thinks its new processors will offer better performance at a lower price than Intel chips.

Like Intel, AMD has been working to reduce power consumption while improving performance and stepping up graphics performance in all of its latest processors. The lowest power Temash chips have a TDP of just 3.9 watts and AMD says it could power tablets that get up to 10 or 11 hours of battery life.

AMD says we should see dozens of tablets and notebooks with its latest chips in the coming months, including models from most major PC makers. 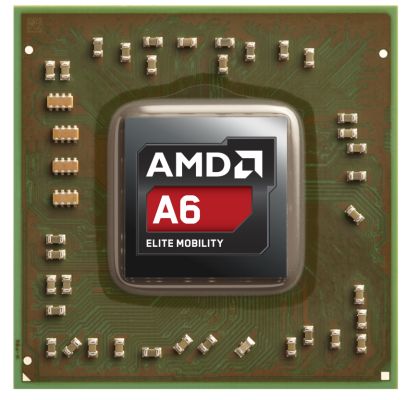 The company is positioning these chips as low-cost competitors to Intel’s Celeron or Pentium chips which fill the space between Intel Atom and Intel Core i3.

It has a TDP of 3.9 watts, and in that space, you shouldn’t expect any miracles from an x86 processor. This chip is primarily aimed at what Intel calls “performance tablets,” and probably won’t offer a stellar experience with more demanding Windows apps.

The A4-1200 is basically AMD’s answer to an Intel Atom chip, and while it should offer significantly better graphics than a Clover Trail processor, it’s too early to say how it will stack up against Intel’s Bay Trail chips due out later this year in terms of CPU and graphics performance.

AMD also offers the A4-1250, which is an 8W version with Radeon HD 8210 graphics at 300 MHz. This chip is aimed at notebooks with screens smaller than 13 inches, which qualify for low-cost Windows 8 licenses.

In other words, the low-cost mini-notebooks that AMD and Microsoft don’t want to call netbooks, but which basically fill the same niche.

AMD’s Temash chips feature new “Jaguar” cores which the company says offer up to twice the computing performance of the “Bobcat” cores used in the last-generation chips, code-named “Hondo” and “Brazos.” 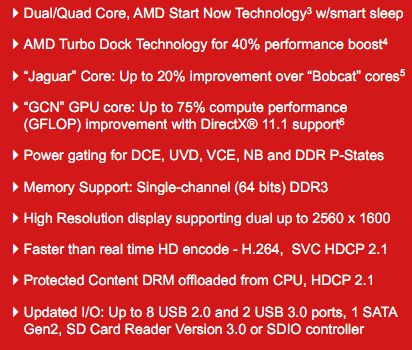 At the same time, AMD says the new chips offer a 20 to 25 percent improvement in battery life. That’s partially because the Southbridge Controller has been integrated into the chip, making Temash processors true SoC (System on a Chip) components.

While AMD is promising better graphics performance than you’ll see in comparable Ivy Bridge or Haswell chips from Intel, AMD is also banking on price. The company thinks that we’ll tablets with Temash chips for well under $500, and notebooks that are a bit less expensive than their Intel-powered counterparts.

But I think that might be a bit optimistic: You can already pick up an ASUS VivoBook X202E

notebook with an 11.6 inch touchscreen display and an Intel Core i3 for less than the price of an Acer Aspire V5-122 with a Temash chip.

These processors use a bit more power than Temash chips, with TDPs ranging from 9W to 25W, which means you’ll need a bigger battery if you want to get the same kind of all-day battery life. But AMD says the new chips are about 25 percent more efficient than last year’s Brazos chips.

That means all things being equal, you could slot a Kabini chip into a laptop that had been powered by Brazos and get 2-3 hours of additional battery life. 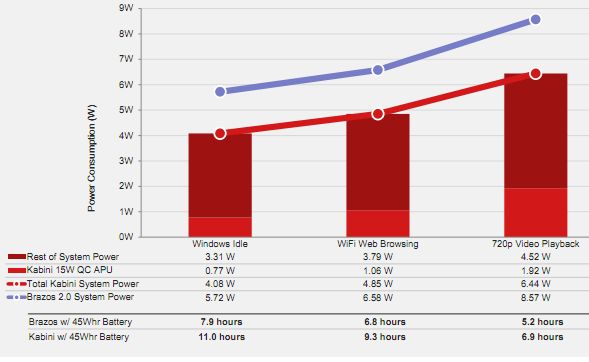 At the same time, AMD says Kabini graphics performance is up to 88 percent better than Brazos.

Initially there will be 5 Kabini chips, divided into 2 categories. The E-Series “Essential” chips are dual-core processors that pick up where Brazos left off, but use a little less power while offering improved performance.

The higher-end A-series quad-core chips are better suited for mid-range laptops and hybrids.

While AMD’s new Richland chips are the most powerful notebook chips the company is rolling out this summer, it’s interesting to see that the company isn’t trying to compete with Intel’s highest-performance Core i7 processors.

Instead, AMD says its Richland chips are meant to offer CPU performance that’s on par with a Core i3 or Core i5 chip while offering better graphics, a few special features (such as AMD’s own brand of wireless display technology, which it says is faster than Intel WiDi), and lower prices.

In other words, you should be able to pick up a laptop with an AMD A10-5757M quad-core CPU for less than the cost of a similar model with an Intel Core i5 chip. At least that’s AMD’s plan — it’ll be up to individual PC makers to set actual prices.

AMD separates its Richland chips into two groups. The LV and ULV line are low-voltage chips with dual or quad-core designs and TDPs of 25 watts or less.

Intel owns the trademark on the term “ultrabook,” so technically you won’t ever see an AMD processor in a notebook that’s called an ultrabook. But Richland low voltage chips are designed to go into the same sorts of laptops with thin and light designs.

There are also more powerful A-Series chips with TDPs of 35W, clock-speeds as high as 2.9 GHz, and higher-performance graphics. Those chips will likely need a little more breathing room than you get in a notebook that’s just 0.8 inches thick, so it’s the lower-power Richland chips that are reserved for the ultrabook-like laptops.

Like Kabini and Temash, AMD has also improved energy efficiency. The company says you should get around 1-2 hours more battery life from a notebook with a Richland processor than you would have from a model with an AMD Trinity chip.

Software and other features

In addition to improving the performance and efficiency of its latest chips, AMD has also built-in support for some new types of software.

For instance, the Temash A6 processor and Richland A8 and A10 chips include support for AMD’s new Face login and 3D gesture-control software.

Face login uses facial recognition software to let you login to your PC simply by looking at the camera. The gesture controls use your device’s existing camera to let you move your hands or other body parts around to control your PC without investing in any special controller hardware like a Leap Motion device.

As mentioned above, Intel is also building support for wireless display technology into its chips, allowing you to stream content from your PC to a supported external display over a wireless network.

Most of those special features are designed for Windows at this point. While AMD says its new chips do support Linux-based software including Ubuntu and Android, the company isn’t currently pushing its new chips for Android tablets or Linux laptops.

AMD has announced plans to release its first chips based on ARM architecture in 2014. At this point the company is only talking about processors for servers. But it’s likely that AMD is also looking at the tablet and convertible/hybrid notebook space.

I wouldn’t be surprised to see AMD follow suit within the next year or two.