Plenty of PC makers have blurred the lines between notebooks and tablets this year by offering Windows computers that can function as either. Acer’s going another way with the Aspire R7. It’s a notebook that you can use as a tablet, or a desktop PC. 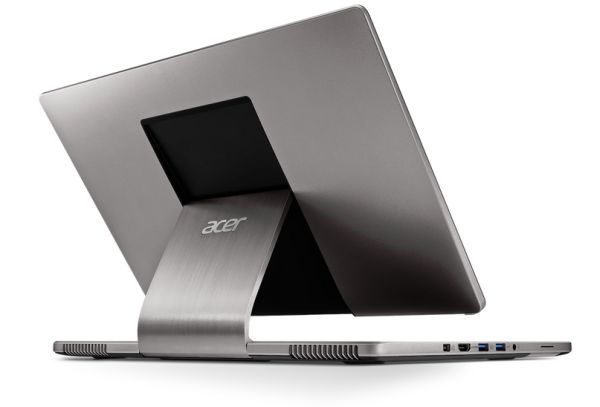 At first glance the Acer Aspire R7 looks like a typical notebook. You can close the lid and carry it around with you. But when you open the lid you’re greeted with an “Ezel” style display.

You can use the computer like a laptop, with the screen facing the keyboard. But you can also flip the screen over the unusual hinge so that the display is facing the back of the computer, allowing you to use the machine as a sort of all-in-one desktop.

Or you can flip the screen so it faces outward and then close the lid so the screen is facing up — which makes it work like a tablet.

Acer calls the four different modes “notebook mode,” “pad mod,” “display mode,” and “ezel mode,” with the last mode offering a sort of hybrid approach with a touchscreen resting partially over the keyboard.

Perhaps the oddest thing about the design is the touchpad which rests above the keyboard, and which isn’t accessible at all in notebook mode. 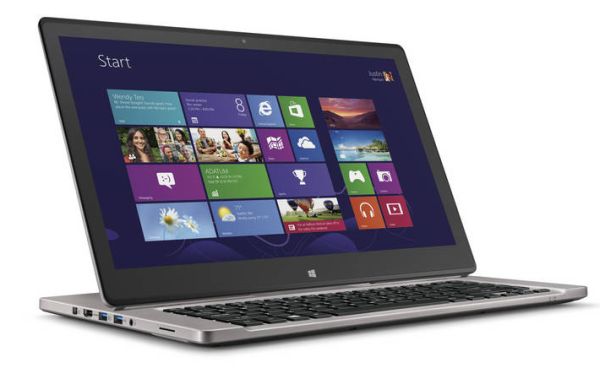 The computer runs Windows 8 software, has a full HD display, Dolby Home Theater audio, and support for 3D gesture-based controls that let you interact with the PC without even touching it.

The computer has a backlit keyboard, three USB ports, VGA, HDMI, and Ethernet jacks, and WiFi and Bluetooth.

Weighing about 5.5 pounds, it’s a bit heavy for a notebook, but awfully light for a desktop.

The Acer Aspire R7 will ship May 17th for $1000 and up, and it should be available for pre-order from Best Buy shortly.

Update: As tsog points out in the comments, the Acer Aspire R7 may not be the first notebook with this unusual hinge style. Flybook launched a similar device half a decade ago, although that model has an 11.5 inch display, an Intel Core 2 Duo processor, and Windows Vista.