Acer’s first 8 inch Windows 8 tablet is expected to launch soon for $380. While Acer hasn’t officially announced the launch details, the company has confirmed that it’s working on Windows 8 tablets with screens smaller than 10 inches, and the Acer Iconia W3 already showed up at Amazon and the FCC.

Now Acer Finland has posted an official product page for the Iconia W3. 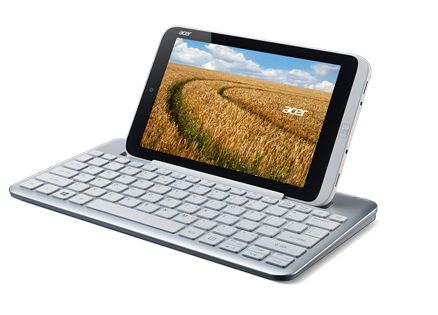 It’s interesting to see that the keyboard dock is wider than the tablet — which allows Acer to offer a full-sized keyboard with a small-sized tablet.

The Amazon listing from earlier this month (which has since been removed) also suggested the tablet would have a 1280 x 800 pixel display, 2MP front and rear cameras, and a 3500mAh battery. The Iconia W3 is expected to ship with Microsoft Office Home and Student 2013.