Arduino boards are small, inexpensive devices that let you build things with sensors (to control anything from a robot to a home automation system). The Raspberry Pi is a small, single board computer that can run Linux-based software.

But what if you want a board that can do both of those things? That’s where the UDOO comes in. It’s a single-board Arduino-compatible computer which has a faster processor than the Raspberry Pi, support for Android or Linux.

The developers launched a Kickstarter campaign to help fund the project a few days ago, and have already blown well past their goal. That means the first UDOO units could hit the streets as early as Sepetember, if all goes according to plan. 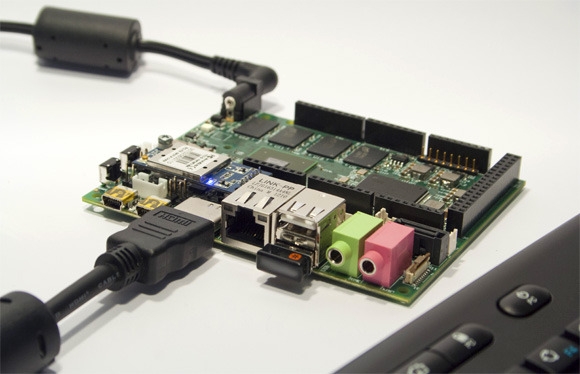 Not only is the whole project kind of cool, but the makers of the UDOO board have put together one of the best videos I’ve ever seen showing what you might actually want to do with an Arduino board — especially one that also has its own on-board computer.

Examples shown in the video include a video game system that receives input from homemade controllers (like foot-pads for a racing game), a motion sensor that you can wave your hands in front of to control music playback, or a remote control robot that lets you follow your dog around with a camera while streaming the video over the internet to a tablet.

Since Freescale offers plenty of documentation for its i.MX6 chips, these systems should be pretty hacker-friendly, and the developers say they’ll support Android and Linux.

9 replies on “UDOO: $109 single-board computer is like an Arduino crossed with a Raspberry Pi”