Intel’s Atom processors are low power chips designed for netbooks, tablets, smartphones, and other devices where long battery life and fanless designs are more important than bleeding-edge performance. That helps explain why an Atom chip from 2012 isn’t much faster than one from 2008 (unless you count the added support for 1080p HD video playback).

But later this year Intel plans to launch its new “Bay Trail” update to the Atom lineup, and it’s expected to be far more powerful than any earlier Atom chip… while still allowing PC makers to build thin and light devices that get all day battery life. 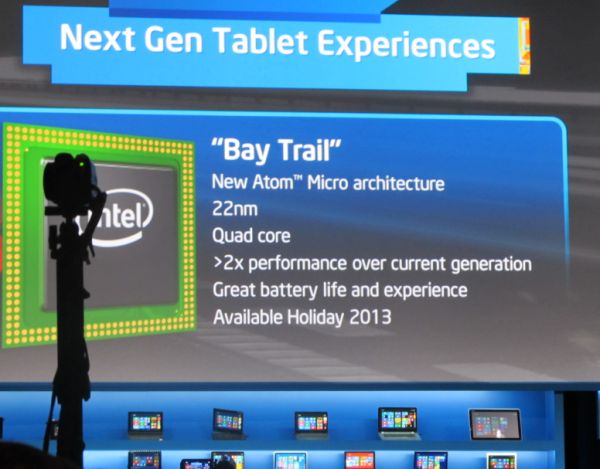 Intel has been talking up the Bay Trail platform for a while, but the company is providing more details at this week’s IDF event in China.

Bay Trail is expected to offer twice the performance of today’s Clover Trail chips, while allowing for tablets as thin as 0.3 inches.

They’ll also be the first Atom processors to feature Intel HD 4000 graphics. That means that not only will you be able to watch HD video, but you should be able to do some 3D PC gaming and other tasks that use hardware acceleration, such as video transcoding (in certain apps).

But that doesn’t mean Bay Trail chips will use twice as much electricity as today’s Atom processors. Intel says tablets with the new processors will be able to run all day, and last in standby mode for weeks at a time.

Part of the reason for the improved performance without increased power consumption is Intel’s move to a more efficient 22nm architecture. Bay Trail chips will also be the first quad-core Atom processors. Today’s models are all single or dual core chips.

While Atom chips offer many of the benefits of low-power ARM-based processors, they’re still x86 chips. That means you can run the full Windows 8 desktop operating system on a computer with an Atom processor. It also means you can run virtually any app designed to run on Windows… something you can’t do on an ARM-based device.

But up until now many of those apps haven’t run particularly well. Photoshop can take a long time to launch or process images. Video editing could be a laborious process.

It looks like Bay Trail could be the Atom chip to change that… although Intel is hedging its bets a bit by seriously reducing power consumption in its next-generation Core processors. Computers with Haswell chips may be able to use as little s 100mW while idling. But they’ll probably cost more than models with Bay Trail chips.