Shuttle has been making small form-factor desktop computers for years. But up until now, if you’ve wanted a model that runs silently thanks to a low-power CPU and fanless cooling, you’ve had to get a model with a relatively sluggish Intel Atom processor.

Now Fanless Tech reports that Shuttle will launch a new fanless model with an Intel Celeron 847 CPU this year. 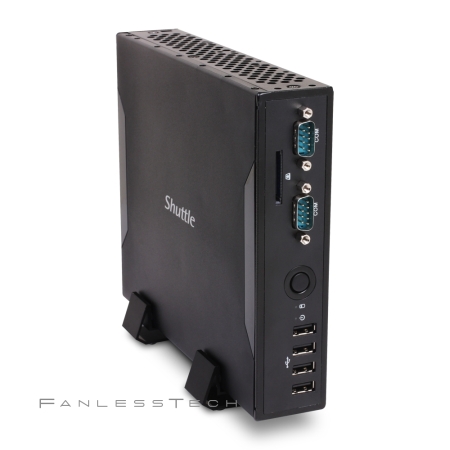 The Shuttle DS47 will get its official coming out party at the Computex trade show in June. But Fanless Tech has posted some of the first pictures.

It measures 7.9″ x 6.5″ x 1.6″ and could make a decent media center PC or a desktop system for a quiet room where you don’t want to be bothered with fan noise. The COM ports on the front are a good indication that Shuttle is also positioning this as a computer for use as a point-of-sales machine or in other commercial or corporate environments.

It’s also a low-power alternative to most desktop computers, making do with a 65W power supply.