Paranoid Android is a custom version of Android that’s been pushing the boundaries of the platform for a while. The developers were among the first to let users decide on a per-app basis whether to use the tablet or smartphone version of various apps. And Paranoid Android’s PIE menu reinvents the Android button and notification scheme.

Now the team is working to change the way Android handles multitasking, by adding support for apps that don’t run in full-screen, and which can be viewed on top of your currently running apps. 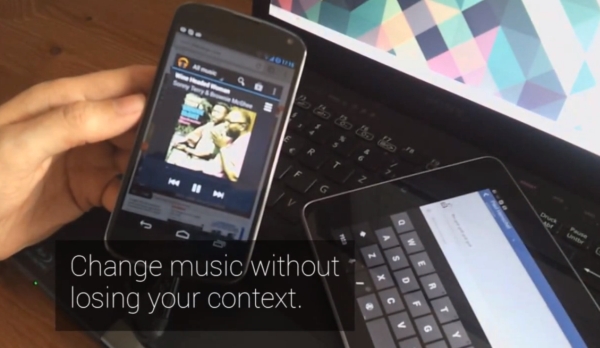 Right now the software is very much a work in progress, and the Paranoid Android Team says the demo video shows less than 10 percent of the planned functionality.

What you can see in the video is a system that lets you open an app in normal full-screen mode, or open that same app in a small pop-up window that partially covers whatever you’re already looking at.

This lets you interact with an app (say a music player, Facebook or Twitter app, or chat app) without really exiting the other apps you’re using. You can see the background app while using the foreground program, and when you’re done you just minimize the pop-up and it goes away.

CyanogenMod already offers the same sort of pop-up view for incoming text messages. But Paranoid Android wants to make it available to all sorts of different apps.

But pop-up windows are just the start. Eventually the plan is to put together a complete system for multi-window management which could let you run more than one Android app at the same time on the same screen.