Lenovo’s ThinkPad Helix is a portable PC with an 11.6 inch display, an Intel Core i5 or faster processor, and a keyboard dock that lets you use the machine as either a notebook or a tablet.

Originally scheduled to ship in March, Lenovo missed that target date… but now it looks like the Helix could be ready to hit the streets in April. 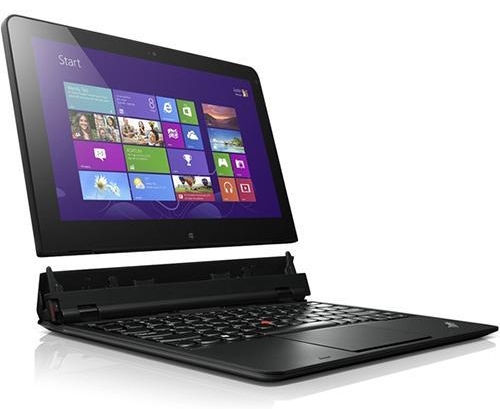 Ultrabook News noticed that the ThinkPad Helix is up for pre-order from Lenovo Japan, and it’s starting to show up on retail websites in the US and Europe as well.

MacMall, for instance, is taking pre-orders for $1700 and up, with an estimated ship date of April 31st — which is odd, since there are only 30 days in April.

That’s a bit higher than the $1500 price Lenovo had originally promised, but there’s plenty of time for the prices to fluctuate between now and the end of the month, or at least for cheaper options with smaller amounts of storage to arrive.

What you get for the money is a tablet with a 1920 x 1080 pixel IPS display with 400-nit brightness, an Intel Ivy Bridge processor, Windows 8 Pro, at least 4GB of RAM, and up to 256GB of solid state disk space.

If you use the tablet and keyboard dock together, Lenovo says you should be able to get up to 10 hours of battery life. The tablet alone tops out at just about 5 hours. But that’s still better than what we’ve seen from some Windows 8 tablets with Intel Core i5 or Core i7 chips.

The Helix is also one of the only Windows 8 hybrid tablets to feature a Lenovo ThinkPad-style keyboard with a pointing stick in the center of the keyboard for folks who aren’t particularly fond of touchpads.

8 replies on “Lenovo ThinkPad Helix 11.6″ hybrid tablet up for pre-order, shipping this month”