HP discontinued the HP TouchPad tablet nearly two years ago — just a few months after launching the 9.7 inch tablet running webOS software. The company also stopped making webOS hardware and started the process of converting webOS to an open source project and eventually selling it to LG for use on televisions.

While that means webOS isn’t exactly a dead platform, it’s been a while since we’ve seen any new features. But if all goes according to plan, an independent team of developers could offer a major update for the discontinued HP TouchPad: The ability to run Android apps as if they were native webOS apps. 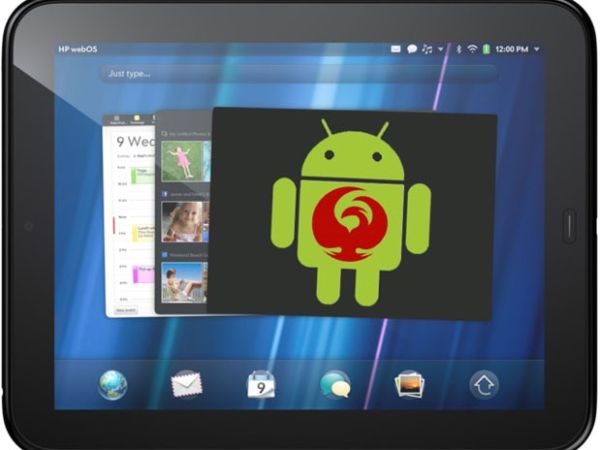 WebOS may never have been as popular as iOS, Android, or even Windows Mobile. But Palm and HP did come up with some interesting concepts including a powerful multitasking system, a universal search tool, and a great email client.

Unfortunately the platform was held back by a chicken-and-egg problem: There weren’t a lot of great third party apps for webOS because of the relatively small user base, and the platform didn’t gain as many users as some other mobile operating systems thanks, in part, to the lack of great apps.

Over the last few years hackers have found a way around this by developing tools that let you load Google Android on the HP TouchPad. This lets you access the Google Play Store and choose from hundreds of thousands of apps, most of which run quite nicely on the TouchPad’s 1024 x 768 pixel display and 1.2 GHz Qualcomm Snapdragon dual-core processor. But you lose the ability to use webOS apps while you’re running the full Android operating system on a TouchPad.

Phoenix International Communications has been working to keep webOS alive as an OS for phones and tablets, and the team recently partnered with OpenMobile to port that company’s Application Compatibility Layer (ACL) to run on webOS. This allows you to download and install Android apps as if they were native apps for another platform. In this case, that’s webOS.

Since the webOS user interface is a bit different from Android’s, you’ll see the Android home, back, and menu buttons when you run an Android app using ACL. But you’ll also be able to launch apps from within webOS and switch apps or close them using native webOS actions such as swiping away a card to close an app.

At this point there’s a working alpha of ACL for the HP TouchPad. But in order to complete the project, Phoenix is taking to Kickstarter in hopes of raising $35,000 or more to help fund the rest of the necessary development.

If the goal is met, and deadlines are kept, the team hopes to release ACL for the TouchPad by July, 2013.

At this point there are no plans to offer ACL for other devices, or for ports of the new open webOS software for other phones or tablets. ACL needs to be configured for the hardware it runs on, and the team is only working on bringing it to the HP TouchPad for now.

But there are a lot of TouchPad users out there. While HP canceled the hardware due to sluggish sales in the summer of 2011, HP managed to sell as many as a few million units after slashing the price from $499 and up to as little as $99.

At this point it might seem a little odd to raise money so that you can run new apps on a tablet running an operating system that hasn’t been updated much in nearly 2 years. But the HP TouchPad is still a pretty decent tablet with a relatively speedy processor, an iPad-sized display, and a unique operating system that still apparently appeals to some folks. As I’m pressing the publish button on this post, the Kickstarter campaign has raised over $4,000 in pledges from more than 100 people.