The Samsung galaxy Note 8.0 is a tablet about the same size as an iPad mini, but it has a higher resolution display, a digital pen, support for running certain apps in side-by-side windows, a Samsung Exynos 4412 quad-core processor, and Android 4.1 Jelly Bean software.

Samsung’s 8 inch tablet is now available in the US for $400, and I got a chance to spend a few minutes with the Galaxy Note 8.0 last night. 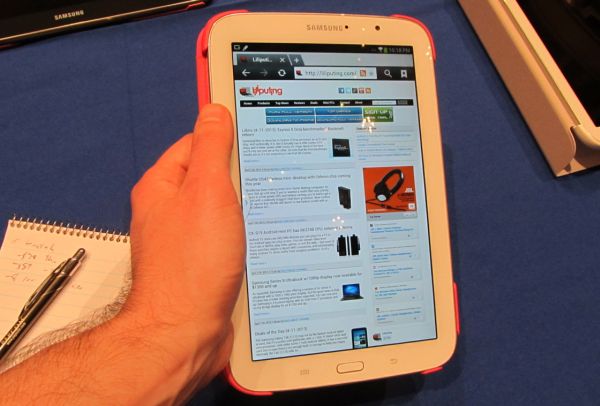 The tablet features a 1280 x 800 pixel display which looks at least as good as the screen on Apple’s similarly-sized iPad mini. Weighing less than 12 ounces, the Galaxy Note 8.0 also feels pretty good in the hand. I could easily imagine using this tablet to read books, watch videos, or perform other activities that would have you holding the device for an extended period of time.

The Note 8.0’s defining characteristic is the digital pen, which lets you write or draw on the screen. But Samsung has packed some extra software into the Galaxy Note 8.0 to take advantage of the pen.

For instance, when you’re watching a video, you can hover the pen over the timeline on the screen without touching it to view thumbnail previews of upcoming portions of the movie. You can also view larger preview of pictures or other content the same way.

And when you hold the pen near the screen, you’ll see a small dot on the screen below the stylus. This can help you tap more precisely by seeing exactly what’s below the pen before you touch it to the screen — something that can be difficult to do with your fingers.

The Galaxy Note 8.0 also has a feature that lets you open two apps side-by-side, by opening a sidebar with a list of apps that support this mode.

A few years ago, Samsung’s TouchWiz software was little more than a skin that runs on top of Android, offering custom icons, wallpapers, settings panels, and more. Now Samsung loads its Android devices with a range of apps including its own software for music, videos, chat, and more.

The Galaxy Note 8.0 also has an IR blaster which lets you use the tablet as a universal remote control for your TV, as well as a “Smart Remote” app which acts as a program guide.

But under all the TouchWiz and S-Note software, the Galaxy Note 8.0 is still running Android 4.1 Jelly Bean, which means you can install thousands of third party apps from the Google Play Store.

On paper, the Galaxy Note 8.0 has a lot of features that Apple’s iPad mini lacks. But it costs $70 more than Apple’s tablet, and twice as much as a 7 inch Google Nexus 7, which could make it a bit of a tough sell for folks that think of it as an Android tablet. Instead, it’s probably best to think of the Note 8.0 as the latest Samsung tablet… which happens to run an operating system based on Google.

Samsung also offers accessories including a line of $50 cases for the Galaxy Note 8.0 in a variety of colors. They’re pretty nice, but hopefully we’ll see some more affordable options soon — you can buy a pretty decent backpack for less money than one of these small cases.