ARM and TSMC have announced that they’ve now taped-out the first ARM Cortex-A57 processor. Taping out is basically the last part of the design process, and it means that we’re one step closer to seeing processors based on ARM’s next-generation designs.

It could be a while before they hit the streets though. Current-generation ARM Cortex-A15 chips are just starting to make a splash in devices such as the Samsung Chromebook, Google Nexus 10, and upcoming Samsung Galaxy S IV. 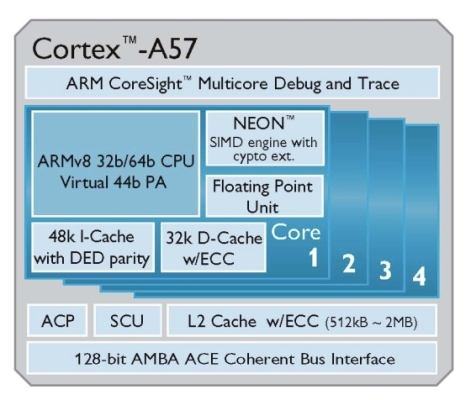 According to the press release, ARM partner TSMC is using 16nm FinFET technology, but as we learned last year, Cortex-A57 chips are actually expected to feature 20nm designs.

That’s still nothing to sneeze at. ARM says Cortex-A57 chips could offer as much as 3 times the performance of current phones without consuming any more power.

Alternately, you could run a newer chip at a lower speed to offer longer battery life than is available from today’s performance.

In other words, your next phone or tablet could be as fast as a low-end to mid-range laptop… or as fast as your current phone, but with much better battery life.

That’s assuming you don’t plan to buy your next phone or tablet for another year or two. Despite today’s announcement, we probably won’t see actual devices featuring ARM Cortex-A57 chips until 2014 at the earliest.

via SemiAccurate and Engadget