The Asus Transformer AiO looks like an iMac-style all-in-one desktop computer. And you can use it that way.

But you can also remove the 18.4 inch display from its base station and use it as a gigantic Android tablet. Asus has been showing off the Transformer AiO for nearly a year, and now it’s available for purchase in the US for $1299 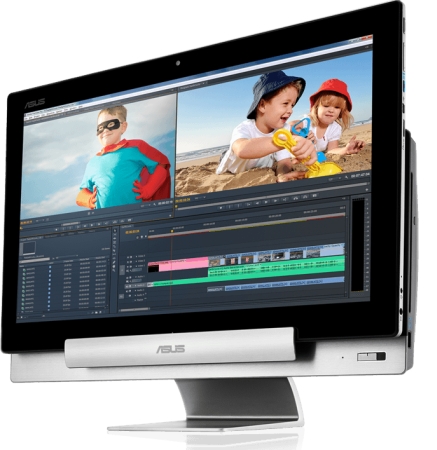 The Transformer AiO has two pieces. The screen portion is a tablet with a 1920 x 1080 pixel IPS display, 10-point multitouch, 2GB of RAM, and 32GB of storage. It’s powered by an NVIDIA Tegra 3 quad-core processor and runs Android 4.1 Jelly Bean.

The tablet portion features WiFi and Bluetooth, measures 18.3″ x 11.6″ x 0.7″ and weighs about 5 pounds. In other words, it’s not exactly as portable as an iPad. But unlike most computer displays, you can carry this one around the house and use it to watch videos, play games, read recipes, or make video calls.

It should get up to 5 hours of battery life, and features a built-in kickstand and handle.

When you dock the tablet to the PC base station, it turns into an 18 inch, 1080p display for your computer.

According to the Asus product page for the Transformer AiO, there may also be models with Core i3 and Core i5 processors and as little as 4GB of RAM. So cheaper models may be on the horizon.