The first Google TV box from Asus is set to hit the streets on April 24th, and it’s already available for pre-order from Newegg, where you can reserve one for $140 (and get a $10 gift card thrown in for good measure).

That’s not quite as good as the $129 price tag we were expecting for the Asus Cube, but if you’ve had an eye on this device since Asus unveiled it in January, the wait is almost over. 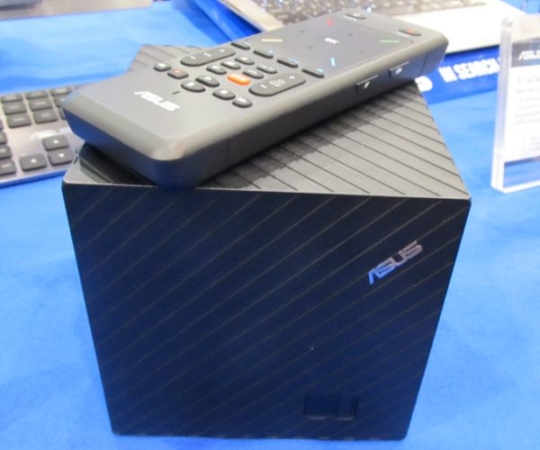 Like most Google TV devices, the Cube is basically a device for running a highly customized version of Google Android on your TV. While most Android apps won’t run on the Asus Cube, the apps that do run are designed for use with a TV and remote. There are also some Google TV-only apps in the Play Store, such as the Amazon Instant Video app, which isn’t available for Android phones and tablets.

You can use those HDMI ports to connect your cable or satellite box to the Cube and then hook up the Cube to your TV. That lets you search for content from your TV service provider and from internet video services using the same interface.

Asus also provides a remote control with a built-in touchpad, a QWERTY keyboard on the back, a microphone, and gyroscopic sensor which should be able to handle pretty much any function you might want to perform with a Google TV device.

While the Google TV platform hasn’t really taken off in a big way, unlike Android it’s specifically designed for couch surfing on your big screen TV. So the user interface is a bit more living room-friendly than what you get if you buy an Android TV stick. On the other hand, those sticks tend to be cheaper than a Google TV box and they support a wider range of Android apps.