Chip maker AMLogic is getting ready to launch its first quad-core processor. The AMLogic AML8726-M8 is due out in the second half of 2013, and it’s a quad-core chip based on an ARM Cortex-A9 design. It’ll likely be used in upcoming Android tablets, and at least one company has announced plans to launch an Android-powered TV box featuring the new chip. 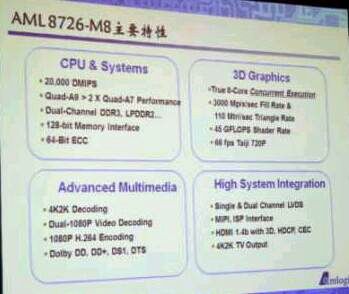 The AMlogic AML-87260M8 runs at speeds as high as 2 GHz, and features an unspecified ARM Mali graphics core with support for dual 1080P video decoding and 4K video output.

It’s a 28nm processor that should go head-to-head with the Rockchip RK3188, another quad-core ARM Cortex-A9 processor from a Chinese chip manufacturer.

Qualcomm, NVIDIA, and Samsung all have processors based on more powerful ARM Cortex-A15 or Krait designs. But AMLogic’s upcoming chip looks like it could be one of the fastest Cortex-A9 processors when it hits the street this summer or fall.