Right now there aren’t any Windows 8 tablets available with screens smaller than 10 inches. But that could change later this year, and it looks like one of the first smaller tablets could come from Acer.

The company is reportedly working on an 8 inch Windows 8 tablet called the Acer Iconia W3. 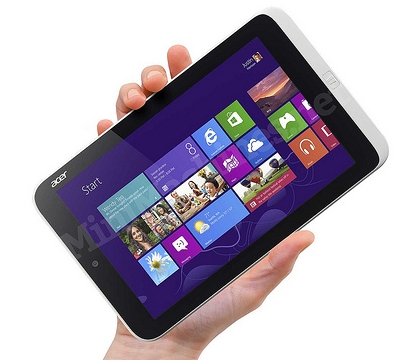 Some specs for the upcoming tablet showed up at the Geekbench website earlier this month. Now French site MiniMachines has snagged the first images of the Iconia W3.

The tablet is expected to have an 8 inch, display, an Intel Atom Z2760 Clover Trail processor and 2GB of RAM.

It’ll be available with Windows 8 Pro and features front and rear cameras, a few ports on the side, and a keyboard dock that should make entering text a lot easier.

Interestingly, the dock appears to be a full-sized keyboard, so the dock is actually wider than the tablet. It might not be the most attractive arrangement, but after spending a little time with a few keyboard cases designed for the 7.9 inch iPad mini, I think I’d rather have a keyboard with full-sized keys than one that matches the size of an 8 inch tablet.

There’s no word on the screen resolution, storage, or other specs and it’s not clear how much Acer plans to charge for the tablet. But MiniMachines reports that the Acer Iconia W3 should hit the streets around September.