Shuttle has been making small form-factor desktops since before the word nettop was born (and largely discarded). While many of the company’s latest models feature low-power Intel Atom processors or higher-end Core i-series chips, it looks like Shuttle may be preparing to launch something in-between.

Fanless Tech reports the company will bring a mini-PC with a 1.1 GHz Intel Celeron 847 processor and Intel HD 2000 graphics to market soon. 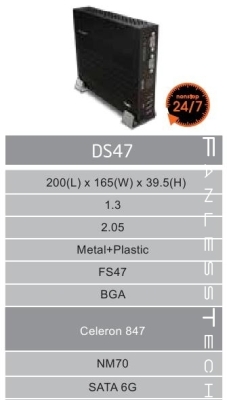 As you might have guessed from FanlessTech’s interest, the computer is also expected to feature passive cooling, which means there won’t be any noisy fans blowing air. That could make the Shuttle DS47 a good choice for use as a media center PC which hangs out by your TV.

While the Celeron 847 chip isn’t exactly a speed demon, it should offer much better performance than you’d expect from an Atom processor as well as support for 1080p HD video playback and Adobe Flash and Microsoft Silverlight for content from YouTube, Hulu, Netflix, and other online video sources.

The Celeron 847 is a relatively low power chip designed for notebooks. It has a TDP of 17 watts, which is much higher than you’d get from an Intel Atom or an ARM-based chip. But it requires much less power than a typical desktop processor, which makes it easier to keep this sort of computer cool (and your electric bills low).

There’s no word on how much Shuttle will charge for the DS47. While the company has a habit of charging premium prices for many of its tiny desktop computers, the low power models Shuttle has released over the past few years have tended to run a fairly reasonable $200 or so

for a barebones model with a CPU but no memory, storage, or operating system.

5 replies on “Shuttle DS47 mini-desktop with Celeron CPU on the way?”