Chinese device maker Ramos may not be a household name in the West, but company has been offering a range of tablets, portable media players, and other mobile devices for years. The Ramos W42 is one of the most recent, and one of the most interesting.

It’s an Android tablet with a 9.4 inch, 1280 x 800 pixel display and a Samsung Exynos 4412 quad-core processor. That’s one of the fastest ARM-based processors released in 2012, and while it may not be able to keep pace with some of the latest chips hitting the streets this year the Ramos W42 outperforms every Android tablet I’ve tested to date… at least in terms of raw benchmark data. 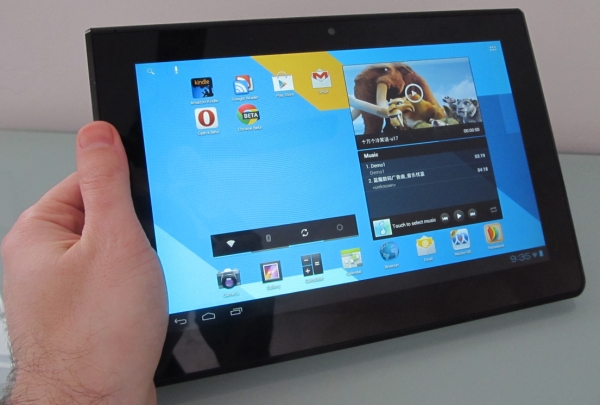 Day to day performance is a bit less stellar thanks to a less-than-perfect touchscreen. But overall the Ramos W42 is a pretty interesting tablet — especially given its relatively low price tag. You can pick one up for as little as $240.

Ramos devices are typically manufactured and sold in China, but retailers such as PandaWill let you order the Ramos W42 and ship it overseas for $240 including shipping. In other words, for about $40 more than the price of a Google Nexus 7 you can pick up a tablet with a larger screen, a faster processor and other goodies that Google’s tablet lacks.

On the other hand, you’re also buying a tablet without the same level of support you’d get from a Nexus tablet.

PandaWill sent me a Ramos W42 tablet to review.

In other words, text, images, video, and other items on your screen should look a little sharper (although maybe not quite as sharp as on a 7 inch tablet with the same resolution). Unfortunately, like most tablets, the Ramos W42 has a glossy screen which makes it less than ideal for outdoor use (or even for near-window use). 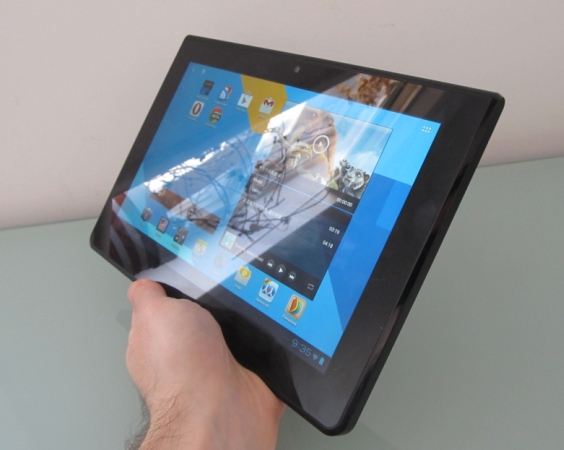 On the front of the tablet there’s a 0.3MP camera for video chat or snapping crappy self portraits. There’s a 2MP camera on the back which isn’t much better (it lacks a flash or auto-focus).

Ramos ships the tablet with Android 4.0 Ice Cream Sandwich. Although that’s a few steps behind the latest software from Google, the good news is that the Ramos W42 comes with the Google Play Store preloaded. That means you have access to hundreds of thousands of Android apps, and most of them seem to run on the tablet without any problems. 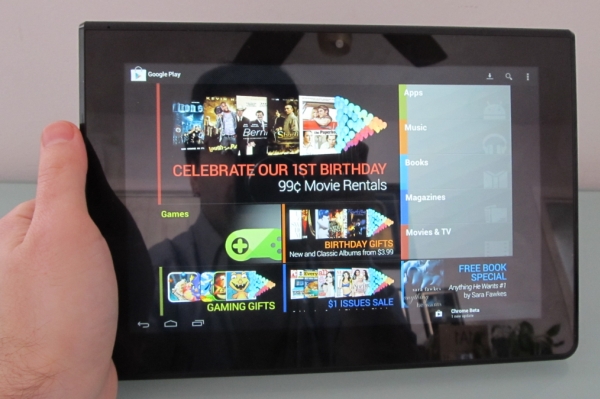 Unfortunately one problem with buying this sort of tablet from a Chinese manufacturer is that there’s no guarantee there will ever be an official software update bringing Android 4.1 or newer software to the Ramos W42.

Of course, you could say the same thing about plenty of phones and tablets from companies that do regularly do business in the West.

Independent developers could always step up and offer custom ROMs — but unless the Ramos W42 develops a strong user base it’s not clear that anyone would take the time. So you should probably only purchase this tablet if you think you’d be happy with the experience it currently offers.

You don’t find a lot of variation in tablets these days: They tend to be slabs of metal or plastic with slightly rounded edges and a piece of glass covering the entire front of the device. 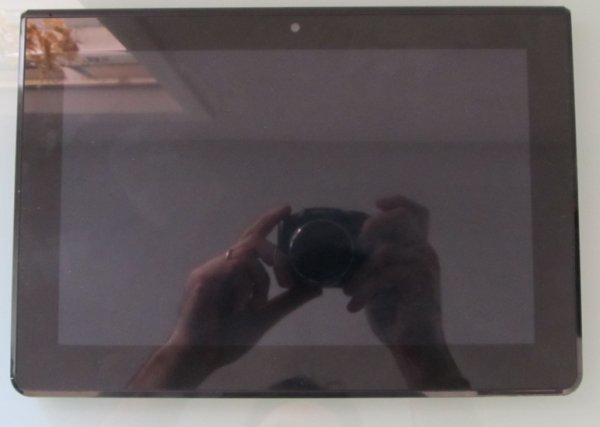 That’s actually not a bad description of the Ramos W42, but it still manages to stick out with a few distinctive characteristics. First, three sides of the tablet are flat, but feature beveled plastic edges which gives the tablet a somewhat distinctive look. It’s the top edge which really stands out though, thanks to a grooved piece of round plastic that reminds me a bit of half a drinking straw.

I’m not sure it’s the prettiest tablet design I’ve ever seen, but at least it doesn’t look like every other tablet on the market.

Ramos says the tablet has an aluminum shell, and I think at least the rear panel might be made of metal, but there’s clearly a fair amount of plastic and glass in the case as well. The whole thing feels pretty solid though, and at 1.15 pounds it’s pretty easy to hold in your hands for an extended period of reading, gaming, or what have you. 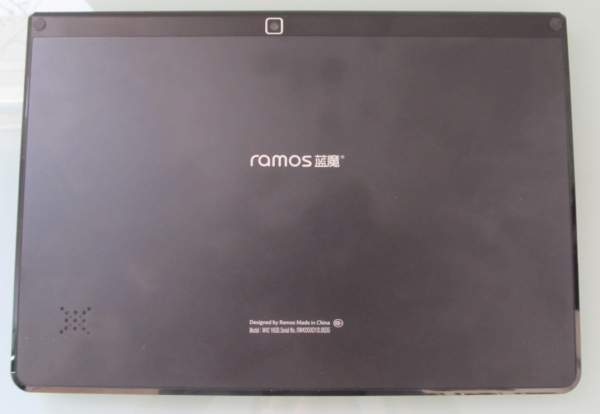 But on the left side you’ll find:

There’s no HDMI port, and you can’t charge or power the Ramos W42 with a USB cable — you’ll need to use the supplied power adapter.

On the back of the tablet you’ll find the 2MP camera and a single speaker which is reasonably clear sounding, but not particularly loud. If you plan to use the tablet to listen to audio in anything other than a very quiet room you’ll probably want to bring alone a pair of headphones.

Samsung, Qualcomm, NVIDIA, and most other chip makers have new processors due out in 2013 that will put last year’s best chips to shame. But the truth is that most Android phone and tablet users are probably packing hardware that’s a few years old at this point.

That means that buying a tablet with one of the best chips from 2012 means you’ll end up with a device that’s faster than most things on the market — and that means that virtually every Android app will run just fine on your device.

Because most developers want to make sure their games and other apps can run on the largest number of devices possible, not just the bleeding edge machines. 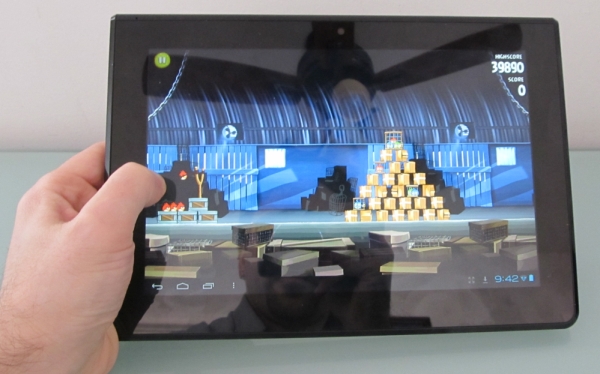 In other words, you probably don’t even need a tablet with a Samsung Exynos 4412 quad-core processor to play the latest Android games. But it certainly doesn’t hurt.

I ran a series of Android performance benchmarks on the Ramos W42 and it came out ahead of every Android device I’ve tested to date, including a Google Nexus 7 (with an NVIDIA Tegra 3 CPU), Ampe A10 (with Freescale i.M6 Quad), and Chuwi V99 (Rockchip RK3066). 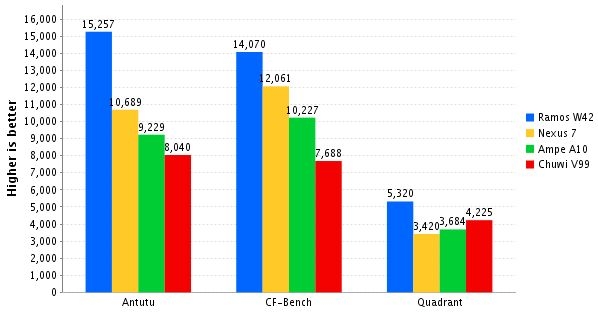 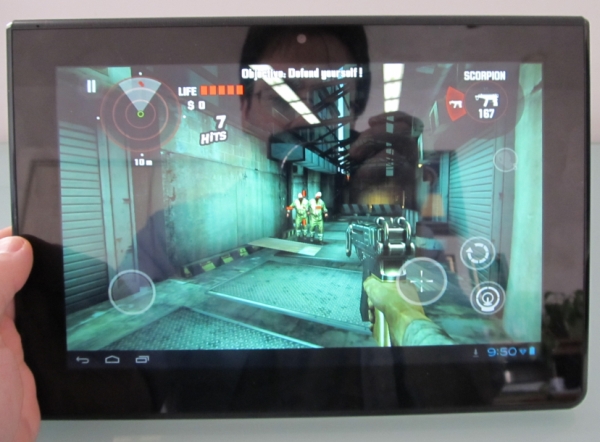 But I did have one major problem while testing this tablet: the touchscreen can be a bit finicky.

It seems responsive enough when launching apps, flipping between home screens, scrolling through websites, or flipping pages in an eBook. But I came to dread having to pull up an on-screen keyboard to tap out an email or even just a web address.

Almost every single time I tried to type something, the touchscreen failed to register a few key presses — which meant spending a lot of time correcting typos. 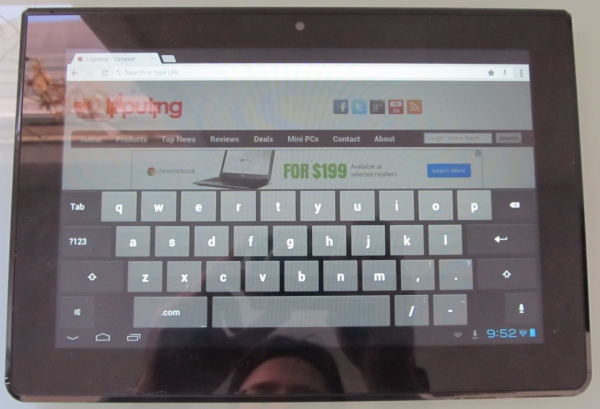 I don’t know if this is a problem affecting all Ramos W42 units or just the model I was sent, but the only way I could imagine doing a lot of writing on this particular unit would be if I connected a physical keyboard.

Ramos says the W42 tablet should get up to 7 hours of battery life — and that seems about right to me based on my tests. The battery also drains very slowly when the tablet is left unplugged. At one point I left it fully charged and unplugged overnight and when I woke up, the Ramos W42 stilled had a 97 percent charge.

Part of the reason the battery drains so slowly is that the tablet seems to disable WiFi when the screen is off. That means you may not always receive notifications when new instant messages or emails come in. It can also be problematic if you’re in the middle of downloading a file or even a large app from the Play Store, since your downloads may pause if the screen turns off after a few minutes of inactivity.

Since I spend a lot of my time using this sort of tablet to read eBooks and websites rather than keeping up on email and chats (that’s what my phone is for), this doesn’t bother me much — but if you plan to use your tablet to keep up on notifications you may want to look for a way to change the WiFi and sleep settings (I didn’t see a way to adjust this behavior, but I didn’t look very hard either). 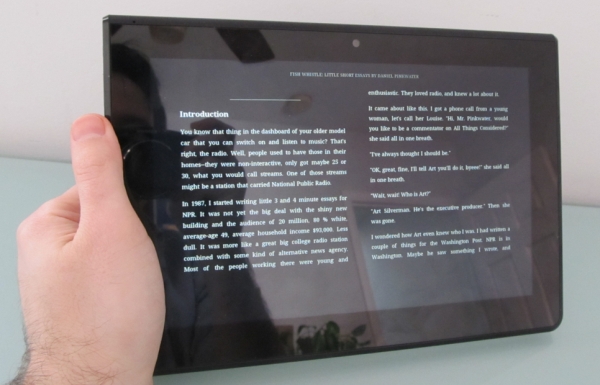 Incidentally, the Ramos W42 makes a pretty great eBook reader. It’s relatively light for a tablet of its size, but it’s large enough to comfortably hold in landscape mode and read books in a two-column view or small enough to hold in portrait orientation. 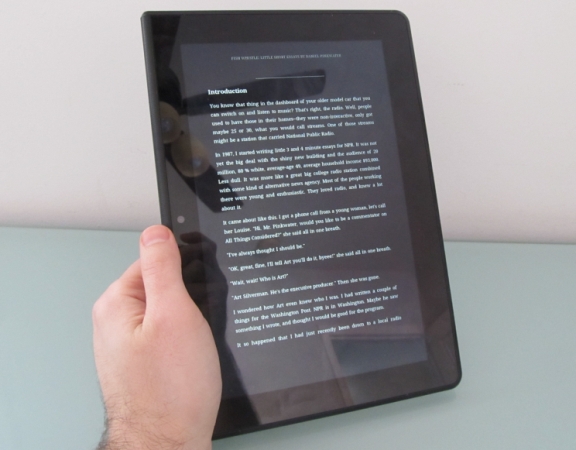 Since the battery retains a charge when the screen is off, I found myself spending an hour or two reading, then putting down the tablet without bothering to plug it in. When I wanted to pick up reading the same eBook again a day or two later, I could just pick up the tablet and resume where I left off — almost as if I were using an E Ink device.

Sure, with about 7 hours of battery life you’ll still have to charge the Ramos W42 much more frequently than an E Ink Kindle or NOOK reader. But it’s nice having a color eReader that also handles HD video playback, web surfing, and gaming duties.

If you’re looking to stretch the tablet’s capabilities a little further than the manufacturer intended, it’s also very easy to root the Ramos W42. All you need to do is download and run Chainfire’s Exynos Abuse app from the xda-developers forum.

The Ramos W42 is an inexpensive tablet that offers pretty stellar performance. But it’s probably not the best choice for every tablet buyer. 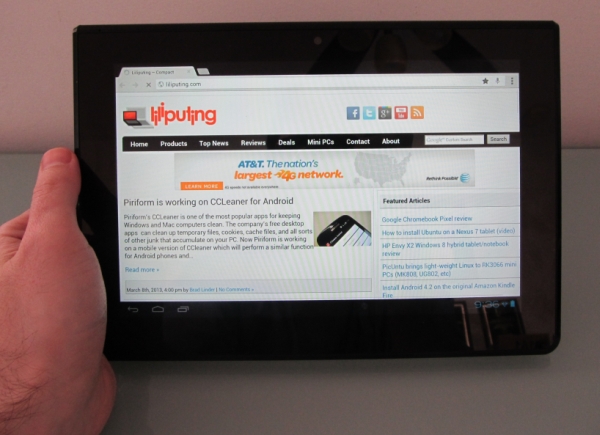 The tablet doesn’t have HDMI output. The touchscreen isn’t as responsive as it could be. And for $40 less you can pick up a Google Nexus 7 tablet which offers performance that’s almost as good.

On the other hand, the Ramos W42 is cheaper (and smaller and lighter) than most 10 inch tablets, makes an excellent eReader, web surfing companions, video player, and portable gaming machine.

Overall, the Ramos W42 is one of the best Chinese tablets I’ve tested so far. But it’s tough to wholeheartedly recommend this tablet due to problems I had with touchscreen responsiveness.

That said, I have no problem at all recommending the 1.4 GHz Samsung Exynos 4412 processor that powers this tablet. It’s more than powerful enough to handle virtually any task you care to throw at it.