Qualcomm’s Snapdragon 600 and 800 series processors are expected to power top-tier phones and tablets this year, including the HTC One and Samsung Galaxy S IV (in some regions). But Qualcomm also has new chips aimed at more affordable phones, including the Snapdragon S200 and S400 chips.

But just because these are the company’s lower-performance chips doesn’t mean they’re low performance. 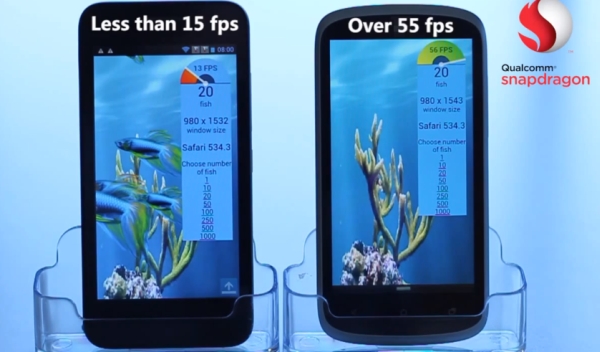 Qualcomm has posted a video on YouTube showing a phone with a Snapdragon 400 dual-core chip pitted against a smartphone with a “competitor’s 1.2 GHz quad-core processor).

The company doesn’t say which quad-core chip we’re looking at. But what we do know is that the Snapdragon chip has a dual-core Krait CPU and Qualcomm Adreno 305 graphics.

It’s that graphics chip that Qualcomm says helps it run (or swim, as the case may be) circles around the other phone in a test of graphics performance.

In other words, you should be able to play games, watch HD video, and perform other tasks on devices with the upcoming processor… which isn’t exactly surprising, since most Android phones released in the past few years can also do all of those things.

Some folks are picking apart the video to try and figure out what the test phone is (it looks like an HTC handset on AT&T’s network), but I’m betting Qualcomm just took apart an existing phone and slapped a Snapdragon 400 chip in it to test performance. I wouldn’t hold my breath waiting for this particular phone to hit the market.