NVIDIA is outlining plans for its next-generation Tegra processors for mobile devices… and for the generation after that as well. NVIDIA’s Tegra 4 chips are scheduled to hit the market this year, but in 2014 we’ll see faster chips with the same graphics core NVIDIA is currently using in the PC market.

By 2015 NVIDIA plans to launch a 64-bit chip which could be used as the guts of a PC, not just a phone, tablet or video game console. 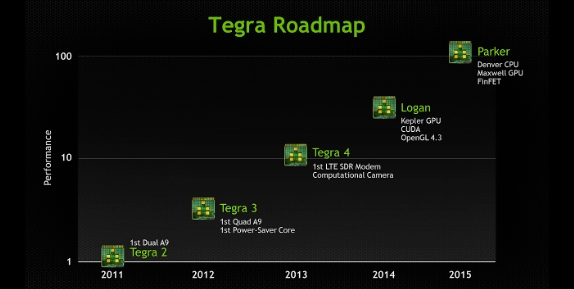 The Tegra 4 processor coming this year is code-named Wayne, while the next-generation chip is code-named Logan. Along with Kepler graphics, it will include support for CUDA, which lets device makers tap into the GPU for speedier performance in certain tasks that aren’t necessarily related to graphics.

The 64-bit processor is code-named Parker.

While it’s hardly surprising that each chip will be faster than the last, NVIDIA’s move to the Kepler graphics architecture could start bridging the gap between gaming on a mobile devices and desktop or laptop PCs… although by the time Tegra chips feature Kepler graphics, NVIDIA’s PC graphics division will be moving onto next-generation architecture which is code-named Maxwell.

Of course competitors including Qualcomm and Samsung will be working to improve their low power processors over the next few years too — and Intel will continue to reduce power consumption of its chips while boosting graphics performance. So NVIDIA doesn’t exactly have the high-performance/low-power chip space to itself.

via SlashGear and CNET