We’ve been interacting with computers through keyboard and mouse input for decades. Touchscreens have added another dimension, and a number of companies are banking on touch-less gestures being the next big thing.

Microsoft’s Kinect lets you control video games by moving your body. Leap Motion wants to bring the same sort of controls to the PC. And 3DiVi’s Nuidroid could do the same thing for Android devices. 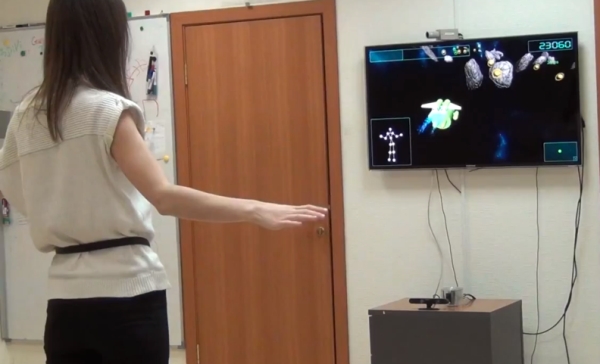 The platform includes a depth sensor and skeletal tracking software that lets you control apps using your body. Eventually the company plans to add facial recognition so you can move your head, adjust your gaze, or change your facial expressions to control a device, as well a hand-tracking software that lets you point, click, and scroll by moving your fingers through the air.

There’s also software that can let the sensor detect a smartphone and use it in special ways — for instance, allowing you to use your phone like a sword or light saber while playing a game.

For now the company is showing off tech demos using the developer preview version of an Ouya game console with an NVIDIA Tegra 3 quad-core processor and Android 4.1 software plus an Asus Xtion Pro motion sensor and Nuidroid software.

Phandroid reports that the prototype is a bit rough around the edges, but it starts to show what might be possible in coming years — including Android based devices for playing video games, controlling home automation, or performing other tasks without even touching a controller.