Google Now is an Android app designed to deliver information to you when you need it, from traffic or weather reports to appointments, sports scores, or flight information. It’s also one of the best looking apps for Android, thanks to its simple, understated design.

If you’ve been wondering why there aren’t more apps that follow that pattern, well, now there’s at least one more. Now Playing is a new music player which borrows heavily from Google Now for its look and feel. 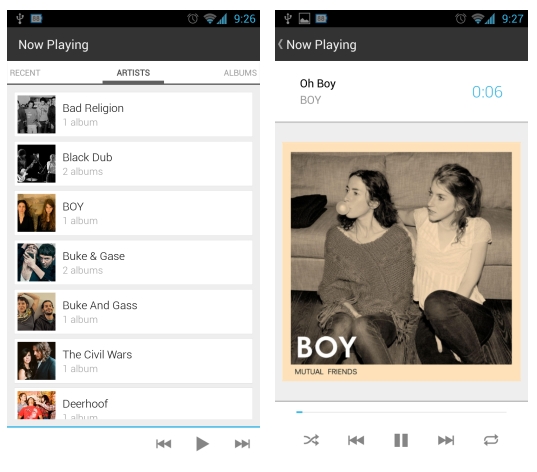 Now Playing is still beta software, but it looks great and works almost as well. You can grab the latest beta from developer Jack Underwood.

He drew inspiration from the project from a reddit post with some concept art for a similar music player. But Now Playing beta is more than just some pretty artwork featuring lots of white space and a card-style theme.

The app also automatically downloads artwork for artists in your collection, grabs song lyrics, and automatically generates playlists for Favorites and Last added. You can also add tracks to a playlist or queue by long-pressing, or use a song as a ringtone.

What it doesn’t have is support for landscape orientation, which makes it a bit awkward to use on tablets. But the developer is working on landscape mode.