A Rasberry Pi is a $35, hackable  mini-computer. An Amazon Kindle Paperwhite is a $119 eReader with long battery life and an outdoor viewable display. And if you poke around a bit, you’ll find it’s fairly hackable too.

So when developer Max Ogden was looking for a portable workstation that he could use outdoors, he decided to pair his Kindle Paperwhite with a Raspberry Pi to create a low-power workstation that could be used outdoors. 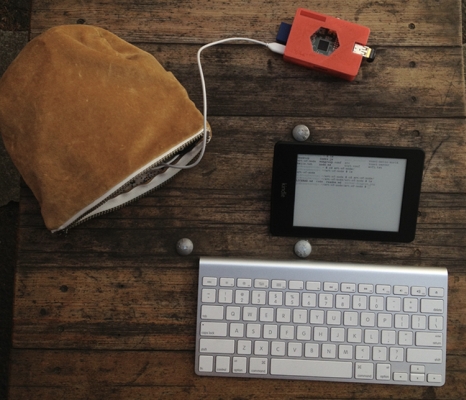 This isn’t the first time we’ve seen a Kindle used as a Raspberry Pi display. But Ogden has posted instructions for using Amazon’s latest eReader with an E Ink display. He’s also created an entirely wireless system by adding WiFi and Bluetooth dongles to his Raspberry Pi.

That lets him pair both the Kindle and a keyboard to the Raspberry Pi using wireless connections (as well as a WiFi travel router).

Since all the components use low-power processors, everything can run for hours using a portable battery pack to power the Raspberry Pi.

Theoretically it would be cheaper and easier to buy an OLPC XO Laptop for use on the go. But this is a pretty neat hack for anyone who already happens to have a Kindle and Raspberry Pi, and it’s a lot cheaper than buying one of the few laptops around which have truly sunlight readable displays.

8 replies on “Kindleberry Wireless: Using a Raspberry Pi and Kindle Paperwhite as a portable workstation”