The Hyundai T7 is a 7 inch Android tablet with a speedy quad-core Samsung Exynos 4412 processor. In other words, it’s about the same size as a Google Nexus 7, but it’s even faster… and at a lower price.

PandaWill sells the Hyundai T7 for about $166, and some sellers at AliExpress offer the tablet for even less. 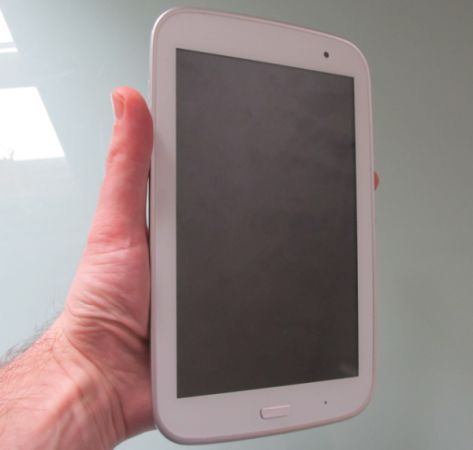 It runs Google Android 4.0 and features WiFi, Bluetooth, and GPS. I don’t know if the Hyundai T7 is officially certified by Google, but it comes with the Google Play Store preloaded and runs most apps available from Google’s app marketplace.

PandaWill sent me a demo unit to review, and I wound up breaking it while trying to upgrade the firmware. I’m pretty sure user error is to blame, but I suppose it’s worth pointing out that the upgrade process can be a bit tricky.

The good news is that I had time to run some benchmarks before turning the Hyundai T7 into a useless lump of plastic. Interestingly it wasn’t quite as zippy as the Ramos W42 tablet, which has the same processor. But the Hyundai T7 came out ahead of the Google Nexus 7 and Asus MeMo Pad ME301T in nearly every test of CPU and graphics performance.

Both of those tablets feature NVIDIA Tegra 3 quad-core chips, while the T7 has the same processor as the international Samsung Galaxy S III smartphone. 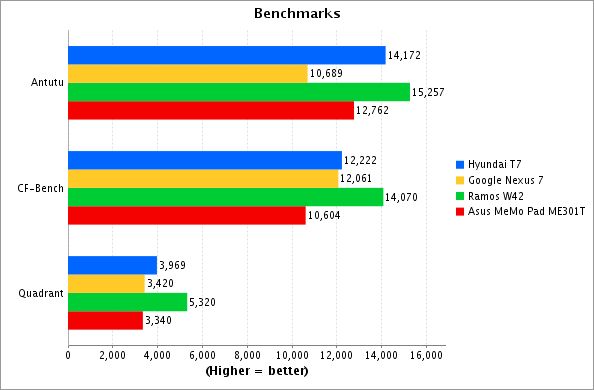 Before I broke the tablet, I also had time to notice a few quirks:

Update: It turns out the screen doesn’t actually scratch easily. There’s just a very well-fitted piece of plastic covering the screen. It fits so well you might not even notice it, but if you remove it the screen should look a little better… and it’s the plastic that scratches, not the glass screen.

I didn’t have a chance to run extensive battery tests, but I did open up the case while trying to bring the tablet back from the dead, and confirmed that it has a 3300mAh battery. According to the official specs, the tablet should get up to 5 hours of battery life. 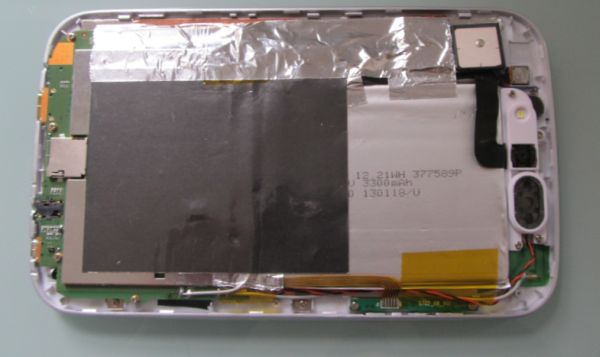 Overall, the Hyundai T7 is an interesting option if you’re looking for a fast 7 inch  tablet with a decent range of ports and a decent display. The overall build quality of the tablet I received was actually pretty good — the tablet is made of plastic, but it’s thin and light and feels good in your hand. But this isn’t the first time I’ve received a Chinese tablet with a dead pixel on the display, so there are clearly risks involved with ordering this type of device.

Also — if you decide to perform a firmware upgrade be very, very careful. If you accidentally leave a file off the SD card before upgrading, you could end up with a tablet like mine that doesn’t do anything at all when you press the power button.