Calligra is a full-featured suite of office software developed for the KDE desktop environment. It includes software for editing spreadsheets, word processing, creating databases, drawing, and much more. Calligra was originally developed for desktop and laptop computers but a version of Calligra was optimized for smartphones and tablets running MeeGo Linux a few years ago.

Now developers are working to port Calligra to Android, and an early version is now available. It’s called Coffice, and you can download an alpha version from the Google Play Store. 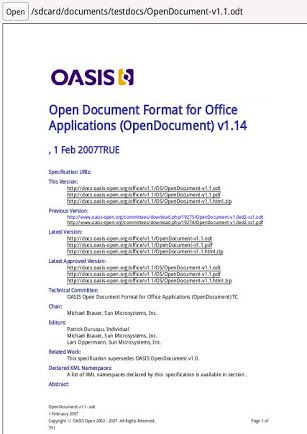 At this point Coffice is very limited. Basically you can use it to open and read ODT (OpenDocument Text) files. And that’s about it.

Developer Sebastian Sauer plans to add support for editing files, support for spreadsheets, and compatibility with Microsoft Office document formats as well. But at this point there are no plans to port all the features of the Calligra’s desktop applications to mobile.

Coffice isn’t the only open source office suite coming to Android. The developers of LibreOffice have also been working on an Android version of their popular desktop software, but it’s not quite ready to go yet.

For now, if you want a powerful office app for Android you’re probably better off using an existing alternative such as OfficeSuite, QuickOffice, Documents To Go, or SoftMaker Office. But if you want to help test and follow the progress of an open source alternative, it’s nice to have an option.