The Cube U30GT is one of the first Android tablets to ship with a Rockchip RK3188 quad-core processor, which makes it one of the fastest Chinese tablets available to date. 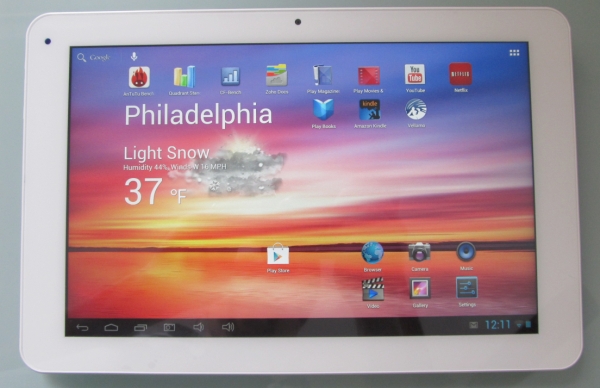 I’ll have a full review of this tablet soon, but I wanted to share some initial thoughts and benchmark results.

As expected, this tablet is fast. The Rockchip RK3188 processor is a quad-core ARM Cortex-A9 chip which performs at least as well in most performance tests as Samsung’s Exynos 4412 quad-core chip and better than NVIDIA’s Tegra 3. 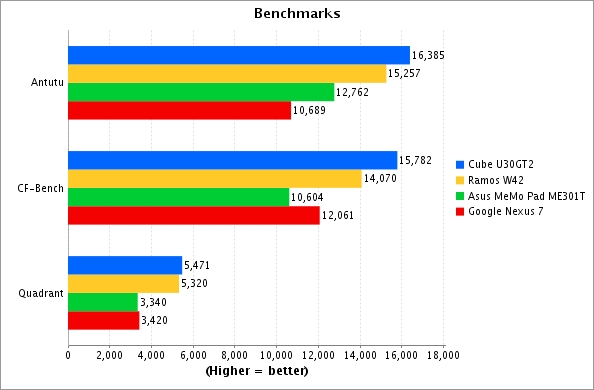 In the chart above, note that the Ramos W42 tablet has an Exynos 4412 chip, while the Asus MeMO Pad ME301T and Google Nexus 7 both have NVIDIA Tegra 3 processors.

The Cube U30GT2 outperforms them all in each of the three benchmark tests I ran, including tests which look at CPU and graphics performance and data read and write speeds.

These tests aren’t always indicative of real world performance, but during the few hours I’ve had my hands on the Cube U30GT2, I’ve found it to be fast and responsive when surfing the web, watching videos, and running other apps.

But I did run into one problem with the tablet so far: WiFi reception is decent, but not stellar. When sitting in my living room near my wireless router, I was able to surf the web, stream internet video, and download apps effortlessly.

Update: There’s a 1.03 firmware update that seems to help improve WiFi range. I can now use the tablet in my office… although occasionally I lose the connection and have to reboot to get it back.

In my home office on the third floor of our house I wasn’t able to even login to my Google account. The tablet said it was connected to the internet, but I couldn’t get online using the web browser or any other apps.

The Cube U30GT2 features 2GB of RAM, 32GB of built-in storage, micro USB and micro HDMI ports, and a microSD card slot. It has a 2MP camera on the front and a 5MP camera on the back with auto-focus and an LED flash.