UK retailer Cloudsto sells Android mini-computers and TV sticks. They’re little devices that you can plug into a TV or monitor to run Android apps on a big screen.

Most of these little boxes feature processors, memory, and a small amount of storage. But the Cloudsto Media PC Pro DriveDock can handle a large amount of storage — you can plug in a laptop hard drive to add up to 2 terabytes of storage. 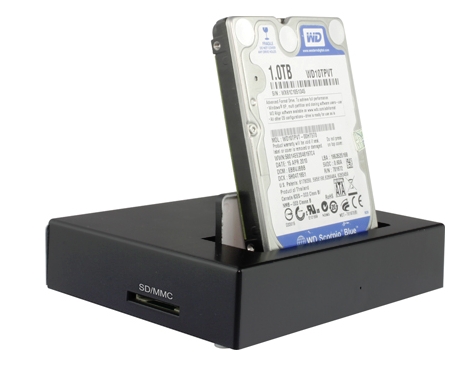 The Media PC Pro DriveDock features an Allwinner A20 dual-core ARM Cortex-A7 processor, 1GB of RAM, and 4GB of built-in flash storage. It runs Android 4.2 Jelly Bean and has a VGA and HDMI output, allowing you to surf the web, watch videos, play games, or run other Android apps on your TV.

It features 4 USB ports which you can use to plug in a keyboard, mouse, game controller, or hard drive. But there’s also a microSD card slot for extra storage and a SATA interface which can handle a 2.5 inch laptop hard drive.

In other words, you can load up a HDD with hundreds of hours of music, movies, photos, or other content, stick it in the dock and access all of that content on your TV.

You can connect the DriveDock to the internet using built-in WiFi or the included Ethernet jack.

Cloudsto is selling the Media PC Pro DriveDock for £95 and expects to ship the device in mid-March.

Interestingly, the docking bay for the hard drive is on top of the mini-computer, leaving the hard drive exposed to the elements rather than tucked away inside the case. Theoretically this makes it easier to remove the hard drive if you want to hook it up to a PC to copy files, but it also means it’s more likely to get bumped or damaged in some other way.