Archos has been offering Android tablets in the US for a few years, but the company’s upcoming Archos TV Connect is something a bit different. It’s designed to let you run Android apps on a TV, turning your television into a game console, web surfing machine, and internet video player.

Introduced at the Consumer Electronics Show in January, the Archos TV connect consists of a box that sits on top of your TV and a multi-function remote control.

It’s expected to hit the streets soon for about $130, and it looks like the device has passed through some regulatory hurdles — it showed up this week at FCC website this week. 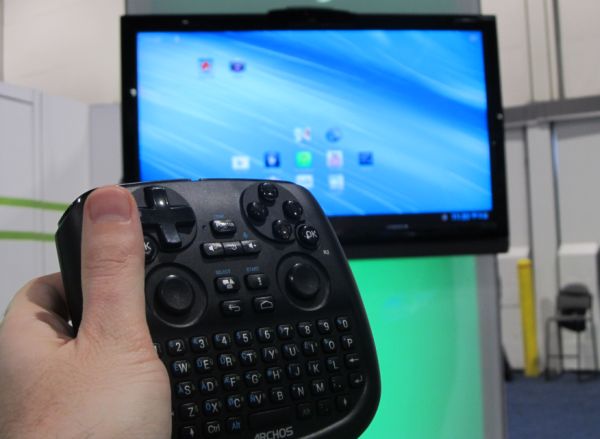 The TV box features a 1.5 GHz TI OMAP 4470 ARM Cortex-A9 dual core processor, 1GB of RAM, 8GB of storage, and Android 4.1 Jelly Bean software. It connects to the HDMI port of your TV and draws power from a micro USB port.

You can connect to the internet over WiFi or using an Ethernet connection. The device also features a mic and camera which you can use to shoot video or make video calls.

Archos includes a complicated-looking remote control with a QWERTY thumb keyboard and a range of buttons, analog sticks, and d-pads which you can use to play games, move an on-screen cursor, or enter text.

While we’re seeing a growing number of Android devices designed to be used with a TV, Android is still primarily designed for touchscreen devices such as phones and tablets. And that means many Android apps are designed for use with touchscreens, not remote controls or gamepads.

But Archos has tried to address that issue by including two analog sticks on the remote control. You can use them to emulate some touchscreen gestures such as pinch-to-zoom.