Just a few days after Canonical released the first builds of Ubuntu Touch for Google Nexus phones and tablets, there are new builds available. And there will continue to be updates made on a regular basis — you can download the latest versions of the touch-friendly, Linux-based operating system at the Ubuntu 12.10 Touch Preview daily builds download page. 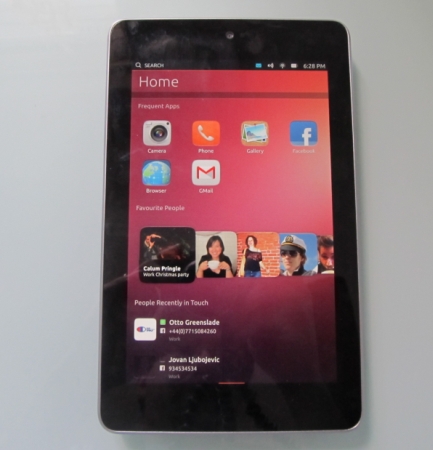 At this point Ubuntu Touch has two parts: a custom version of the CyanogenMod 10.1 Android 4.2 ROM and an Ubuntu file system. Basically what you’re doing when you install Ubuntu on an Android device is running a stripped down version of Android and accessing Ubuntu using chroot so that the Ubuntu user interface and file system run on top.

That means that you can’t run Android apps, but if you have a device with an unlocked bootloader that’s capable of running CyanogenMod 10.1, it can probably run Ubuntu as well. Canonical based the software on CM10.1 so developers wouldn’t have to build everything from the ground up — support for touchscreens, modems, and other hardware is already baked in.

Unofficial builds of Ubuntu are either available or in the works for more than a dozen devices.

The new daily builds will include new features and bug fixes… but they’re not stable builds, which means they may also break things, introduce new bugs, and cause problems. So proceed with caution.

At this point though, the only reason to install Ubuntu on your phone or tablet is to see what it looks like and contribute to development — the operating system isn’t fully functional yet. For instance, many core apps aren’t supported and mobile data doesn’t work yet.