Now that you can run Ubuntu 12.10 Touch Preview on your Nexus phone or tablet, should you? That depends.

Canonical has released a preview build of its touch-friendly version of Ubuntu so that enthusiasts and developers can get a sense of how the operating system works on phones and tablets. But the build released on February 21st is very rough around the edges. 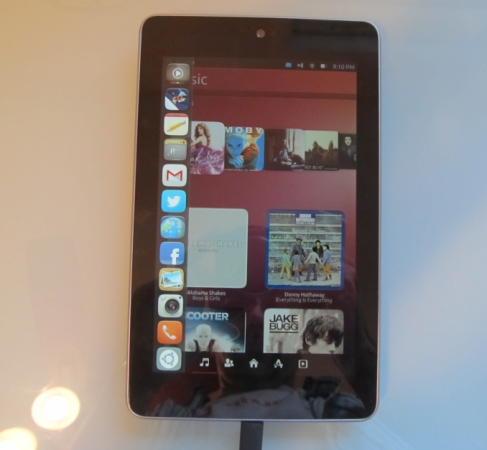 If you’re a developer looking to explore the potential of the platform, or a curious Ubuntu-lover looking for a taste of things to come, it’s worth checking out. But if you just want to use your mobile device as a… well, as a mobile device, then you might want to hold off for a little while.

After taking Ubuntu 12.10 Touch Preview for a spin on my Nexus 7 tablet, here are a few thoughts.

Canonical says the minimum requirements for Ubuntu tablets will eventually include an ARM Cortex-A15 dual core or faster processor. The Nexus 7 has a last-generation ARM Cortex-A9 quad-core CPU.

So it probably shouldn’t be surprising that it feels sluggish at times when running Ubuntu for tablets.

What is a little surprising is that it feels sluggish even though it’s not actually doing very much. There are very few fully functional tablet apps available so far, so for the most part I spent my time opening web pages and fake apps (which appear to be little more than screenshots) and navigating between menus. After opening a few “apps,” the OS started to feel kind of slow.

I ran a few web benchmarks, and the Nexus 7 scored a pretty awful 4625 in Sunspider and 242 in Google Octane. The same tablet scored a 1730 in Sunspider (lower is better) and 1410 in Octane (higher is bettery) when running Android 4.2.1.

You’ll probably get better results with a Nexus 10 tablet, which does have a dual-core ARM Cortex-A15 CPU.

What’s missing and what doesn’t work

The camera on the Nexus 7 doesn’t appear to work at all, and neither does landscape mode. Both of these functions should work on the Nexus 10 tablet, from what I understand.

The notifications area comes pre-populated with missed calls and other messages from people you’ve never heard of. This lets you see how notifications look and learn how to dismiss them by swiping. I guess that’s kind of useful, since you’re not likely to receive any real notifications on your device (since there aren’t the apps to support them).

If you check out the music or movies sections, you’ll find icons for a bunch of videos and albums you don’t own and can’t watch.

In other words, the whole operating system feels a bit like one of those phones you see at a store that has a sticker of an operating system placed on top of the screen. It looks like it works, but it doesn’t really.

That said, you can access notifications, switch between apps, surf the web, and get used to the way gestures work by installing Ubuntu 12.10 Touch Preview on a device like the Nexus 7.

Swiping from the left edge of the screen to bring up a list of frequently used apps is a nice way to do away with the home button we’ve grown used to on Android and iOS devices and allowing apps to use the full screen.

Likewise, switching between apps by dragging from the edge of the screen feels pretty natural — although it’s easy to accidentally switch apps if you’re running a program that requires a lot of swiping. For instance, I didn’t mean to exit the Gallery app when looking at pictures, but the gestures to switch images and switch apps are nearly identical.

Canonical has released tools that let you install Ubuntu 12.10 Touch Preview on a Samsung Galaxy Nexus or Nexus 4 phone or a Nexus 7 or Nexus 10 tablet.

While these devices ship with Android, it’s also easy to unlock the bootloaders and install alternate software.

If you use Canonical’s tools, you’ll need to hook up your phone or table to a computer running Ubuntu Linux and wait an awfully long time for all the files to download.

On the other hand, if you’re comfortable using fastboot and a custom recovery on your device, you can follow our guide for installing Ubuntu. It’s much faster, and it works with Mac, Linux, or Windows computers.