The Samsung Galaxy Camera is a point-and-shoot camera with a 16MP image sensor, a 21x zoom, and a 4.8 inch touchscreen display which you can use to view images… or to play games, surf the web, or run other Android apps. That’s because the Galaxy Camera has the guts of an Android phone, including a quad-core processor.

Up until now the Galaxy Camera was also only available with a phone-like 4G LTE modem which you could use to upload your images from nearly anywhere. But if you don’t need on-the-go internet access, Samsung will soon have a cheaper option: A WiFi-only Galaxy Camera. 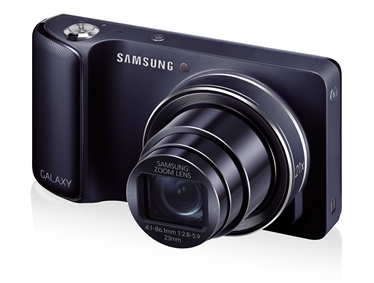 The company just pulled the wraps off the new WiFi-only model, and aside from the omission of mobile broadband, it’s nearly identical to the original.

The new camera has a 1650mAH battery, 8GB of built-in storage, a microSD card slot, HDMI output, and even GPS support.

It has a 1.4 GHz quad-core processor and runs Android 4.1 Jelly Bean software.

Samsung hasn’t announced the price for the new WiFi-only model yet, but the company does promise it will be “more affordable.” AT&T currently sells the Galaxy Camera 4G for $500.