Google may may be getting ready to take a page out of Apple’s book by opening retail stores to sell devices running Google software.

According to 9to5Google the idea came up when when officials were trying to figure out the best way to sell the upcoming Google Glass wearable computer. The idea is that most folks would want to try this sort of radically new technology before plunking down $500 to $1000 to buy a mobile device that you wear on your head.

Update: According to Google’s Andy Rubin, the company is not planning to open a bricks and mortar store. 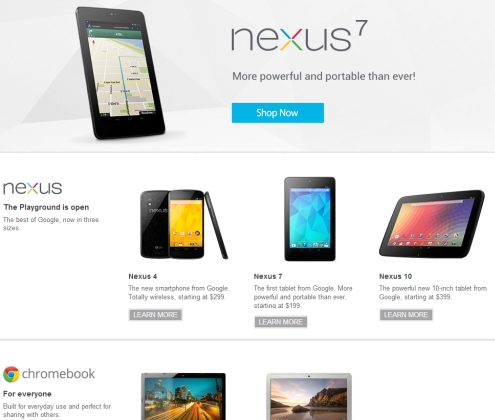 While Google isn’t really known as a hardware company, the company does sell a line of devices directly through its website, including Nexus phones and tablets running Android and the latest Chromebook laptops running Google’s Chrome operating system.

All of those products could theoretically benefit from a bricks and mortar showroom where potential customers could try before they buy.

Right now you can check out Chromebooks at select retail locations such as Best Buy in the US or Dixon’s in the UK, but few stores carry Nexus phones and tablets. It’s also possible a Google Store could feature other devices running Android such as phones and tablets from companies such as Acer, Asus, Lenovo, Samsung, and Toshiba.

As 9to5Google points out, Google also sells clothing, toys, and other products which might do well in stores. But clearly that business isn’t a high priority for the company. The Google Store looks like it was designed in 1999 and barely updated since.