The Ramos W42 is a tablet with a 9.4 inch, 1280 x 800 pixel display and the same quad-core processor that powers the Samsung Galaxy S III smartphone. It’s also a lot cheaper than the Galaxy S III, since you can pick one up from Pandawill for $247 – no contract necessary.

Pandawill was kind enough to send me a unit to review, and while I haven’t had a chance to fully test its battery life and other real-world performance characteristics, I did run some benchmarks… and it’s one of the fastest Android devices I’ve used to date. 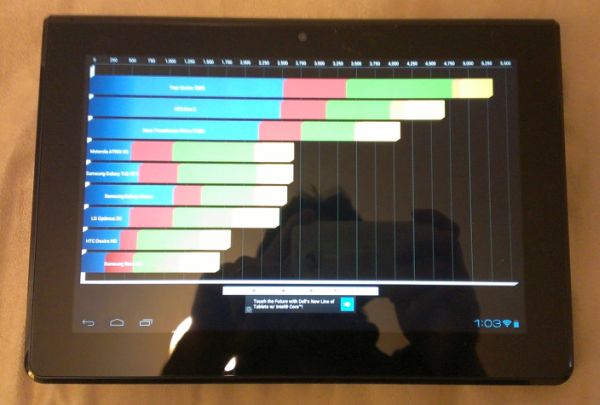 That’s not surprising, given that the Ramos 42 has a 1.4 GHz Samsung Exynos 4412 ARM Cortex-A9 processor and Mali 400 graphics. But it’s good to see that the benchmarks are consistent with what you’d expect from that processor.

You never really know what to expect when you’re importing a low-cost Chinese tablet. 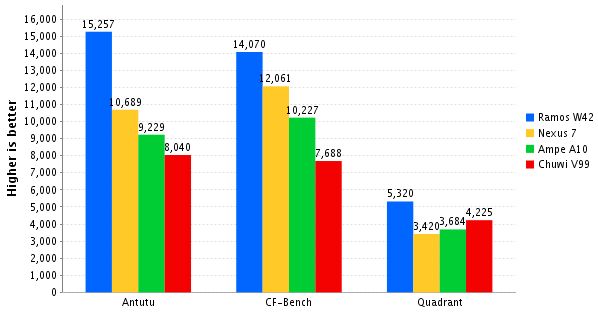 The Ramos W42 also has a decent IPS display with wide viewing angles — and text and pictures look a little sharper on a 9.4 inch, 1280 x 800 pixel display than on a 10.1 inch screen with the same resolution.

I do have a few concerns so far. The touchscreen isn’t quite as responsive as I’d like — it regularly fails to notice letters when I’m tapping on the keyboard. I’m also not expecting the 10 hours of battery life you’d get from a high-end tablet. Ramos estimates that the W42 should last for 6 to 7 hours, which I plan to test soon.

The tablet has a plastic case which is a little thicker than those you’d find on some tablets, but it feels pretty sturdy and at 1.15 pounds, it’s easy to grip in your hands, which makes it a decent size and shape for reading books, watching videos, or playing games.

The Ramos W42 supports WiFi and Bluetooth and has cameras on the front and bac. It has a microUSB port, microSD card slot, but no HDMI output.