Opera has been making web browsers for nearly two decades, but the Opera browser for desktop computers has never come close to rivaling Firefox, Internet Explorer, Safari, or Chrome in popularity. Opera’s mobile browsers, on the other hand, have been quite popular in recent years — Opera says it now has 300 million active users across all of its PC and mobile browsers.

So it’s an interesting time to see the company announce a major change: Over the next year Opera will be moving from its own Presto rendering engine to WebKit, an open source rendering engine used to load web pages in Safari, Chrome, and many other web browsers.

Update: Did I say Webkit? I meant Blink. Opera will be using Google’s Chromium project as the basis for its rendering engine, and since Google is forking Chromium and building its own product called Blink, that’s what Opera will use too. 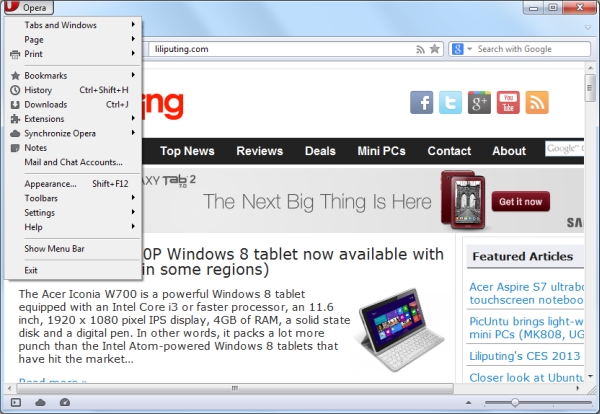 Presto is a speedy rendering engine, and it’s designed to support web standards — but because Opera isn’t as widely used as some other browsers, many web developers don’t bother to test their apps to see if they’re compatible. As a result, while Opera strives to support web standards as much (or more) than any other company, there are still some popular web sites and web apps that don’t load properly.

By moving to WebKit, Opera can spend more time adding features to its browsers rather than working to improve the underlying rendering engine.

So what does this mean for users going forward? While upcoming versions of Opera will likely maintain existing features such as Speed Dial (shortcuts to your favorite websites on the new tab page) and Link (which lets you sync your data across device), developers at Opera are also working on entirely new ways to interact with a browser.

For instance, last month the company showed off an upcoming gesture-based web browser based on WebKit. It’s code-named ICE, and it’s designed for tablets and other mobile devices. Opera also plans to show off a new Opera browser for Android at Mobile World Congress later this month.