The organization behind the Firefox web browser is getting ready to launch its platform for mobile phones. Firefox OS has been in development for some time, but today Mozilla announced that it has 23 partners lined up to support the launch of the new smartphone operating system, including ZTE (who will build some of the first phones), Qualcomm (who makes the chip that powers that phone), and carriers including Sprint, Deutsche Telekom and Telefonika.

The first Firefox OS phones could launch this summer, although it might not be until next year that we start to see models hit the US. 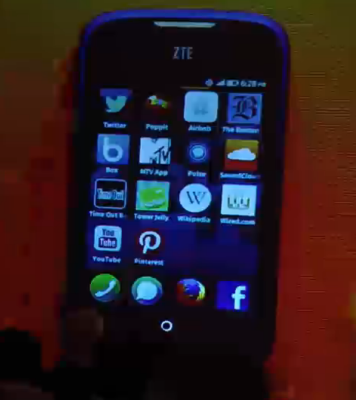 In a press conference at Mobile World Congress in Barcelona Spain, Mozilla officials expressed some pretty lofty (and idealistic) goals for the project, including an emphasis on “open” technologies.

Unlike Google, Apple, Microsoft, Canonical and most companies that offer smartphone operating systems, Mozilla is somewhat better positioned to preach preach support for emphasizing open access to platforms over profits, because Mozilla is a non-profit organization.

Mozilla’s approach toward doing that is to support HTML5 and other web technologies for apps and even the entire user interface for Firefox OS. That means if you can develop a website you can develop an app that will run on a Firefox phone.

Historically web apps have been sort of second-class citizens on mobile devices. While the original iPhone was also designed to run apps written with web technologies, users and developers quickly complained that those apps didn’t run as well as the native apps which Apple had written for the phone, and that led Apple to quickly launch a software developer kit and App Store for native apps.

That said, the first Firefox OS phones aren’t designed to be superphones. They’re low-end devices that are designed to be affordable… which means that early customers might not be expecting bleeding edge performance.

The phone does have decent connectivity options though, including WiFi, Bluetooth, GPS, FM Radio, and GSM and UMTS support.

Mozilla is also showing off upcoming devices including the ZTE Fire smartphone, the Alcatel OneTouch Fire, and says Huawei and LG are also working on phones that will run the open source operating system.

So what about carriers? Why would they want to sign onto Firefox OS? Mozilla spelled out a pretty good reason: While there will be a Firefox Marketplace for apps, the organization also expects third party app stores to pop up — and they’ll be fully supported. That means carriers can develop their own app stores and use their own payment methods.

Whether that’s something users want or care about (or something that will cause more headaches and hoops to jump through for developers) remains to be seen. But if carrier start pushing Firefox OS phones hard enough, and if customers start buying them, hopefully we’ll start to see developers write (or port) high quality apps for the platform.