Google has started rolling out a minor software update for Nexus smartphones and tablets. So far it looks like Android 4.2.2 is available for the Nexus 7 and Nexus 10 tablets and the GSM Galaxy Nexus smartphone (but not the Verizon version).

There are no official release notes yet, so it’s tough to say what’s new — but since the version number only moved from 4.2.1 to 4.2.2, it’s likely that this is primarily an update designed to fix bugs.

Update: It looks like there’s a partial fix for audio-over-Bluetooth included in the update. Android 4.2.2 also lets you toggle WiFi and  Bluetooth by long-pressing their icons  in the quick setting panel, and when you download apps from the Play Store, Google will show an estimate of how much time  is remaining. 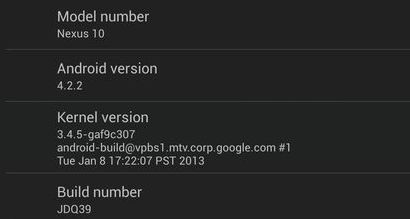 Patient folks will probably be prompted to download and install the over-the-air update sometime in the next few days. Impatient folks can grab the latest update and install it manually, but make sure only to install the proper update for your device. You can’t install a Galaxy Nexus build on your Nexus 7 tablet, for instance.

Note that updating a Nexus 4 will remove support for 4G LTE.

If you do lose root access while updating your device (or want to root a device that’s already running Android 4.2.2), xda-developers forum member udimars30 has instructions for rooting Google’s latest mobile OS and installing ClockworkMod Recovery.