Makers of Linux-based operating systems have been letting you boot Fedora, Ubuntu, and other popular software from a removable CD, DVD, or flash drive for years. Now you can use your Android phone instead.

DriveDroid is a free app that lets you store a Linux ISO on your phone, plug it into a PC and boot from that disk image. 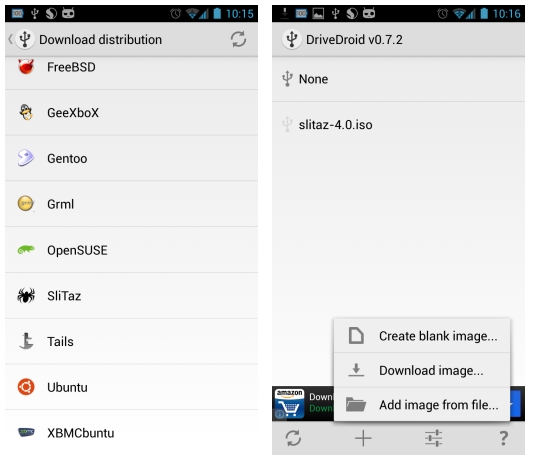 When you boot from this sort of disk image the entire operating system is loaded into your computer’s RAM. That means that the OS should run pretty quickly (depending on what kind of hardware you’re using), even though it’s booting using files grabbed from your phone over a USB connection.

It also means that you can boot into an operating system such as Ubuntu or Chromium OS without overwriting Windows or whatever other software’s already on your PC’s hard drive.

There are a few good reasons to do this sort of thing. It gives you a chance to test an operating system before deciding whether to install it. You can also boot a Linux-based operating system on a PC as a sort of repair utility — you can reformat the hard drive, recover files, or perform other operations if there’s something wrong with your primary operating system.

The easiest way to test out DriveDroid is to download SliTaz, an operating system that only takes up 35MB. It’s one of the quickest operating systems you can download, and it’s a light-weight OS that doesn’t require a bleeding edge computer to run well.

You can also use the app to create a blank USB image which you can use to store files that are accessible to a PC.

DriveDroid requires a rooted phone or tablet and a USB cable to work properly. Some operating systems and some Android devices may not work as well as others.